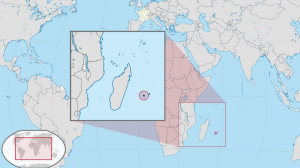 In case you were wondering, here is where you can find Reunion Island.

An ehfTV video made me think it’s the perfect time for an article on two of my favorite fields of study: geography and handball. The video on the subject highlights the summer trip of Germany’s top team from Kiel to Reunion Island like a travel diary. Apparently, this team-building trip to Daniel Narcisse’s home has put them in a good position so far this season.

As someone who likes to think of himself as a “maphead”, I must admit that before living in France, I knew very little about the French overseas departments and territories. However, I knew Reunion Island because many years earlier my curiosity had been piqued by the talented Jackson Richardson. Who is this Rasta-looking Frenchman with an American-sounding name?

This investigation finally led me to an atlas to find out where the hell this Reunion Island was. Located in the Indian Ocean east of Madagascar, this French outpost is about as far from the United States as you can get. This is not an exaggeration because Reunion Island is almost an “antipode” to the western United States. In other words, if you start digging a hole. straight through the center of the Earth, you will eventually emerge into the Indian Ocean not far from this improbable French Iceland.

French Iceland? Well, while I doubt handball is part of Reunionese culture to the same extent as it is in Iceland, there’s no denying that this island of 800,000 souls has produced two of the best players in the world: Jackson Richardson and Daniel Narcisse. We can debate where these two gentlemen rank among the greatest of all time; Top 10? Top 20? Top 50? But, it is undeniably remarkable that this remote outpost can lay claim to such a claim.

Why Reunion Island? How did it happen? Well, if anything, this result is indicative of France’s effort to integrate all of its outlying departments and territories into France proper. In an American context, Réunion and the Caribbean/South American departments of Guadeloupe, Martinique and French Guiana are the French versions of Hawaii. These “departments” are fully represented in the French National Assembly, in the same way that Hawaii is our 50 in its own right.and State. And while these departments have their own culture, a lot of effort goes into making sure these citizens also realize they’re French just as much as someone growing up in Paris. And one of those efforts is financial aid to the athletic department.

I don’t know exactly what is planned, but it is clear that the sport is well organized because the athletes of these departments are well represented in the French national teams in several sports disciplines. In addition to Richardson and Narcisse, Joël Abati, Didier Dinart and Cédric Sorhaindo are recent products from the overseas departments. And these are some of the most notable players. There are also many talented players who play for French club teams.

Considering these French outposts as part of France, this depiction is only somewhat remarkable. Of course, these regions of France are overrepresented in terms of relative population, but this is true in other countries and in other sports. For example, there is a preponderance of ice hockey players in the United States from Minnesota and very few from Texas. There are more beach volleyball players from California than from Illinois, etc., etc.

But, if we place ourselves in the perspective of comparing these French outposts with their non-French neighbors, the difference is day and night. I guess a star team at the level of the department of La Réunion could beat all the national teams of sub-Saharan Africa, with the possible exception of Angola. They could certainly easily handle any nation with a coastline on the Indian Ocean. In the United States, Guadeloupe and Martinique would likely give Cuba a run for silver in a Caribbean championship. They would be a cut below Argentina and Brazil, but I bet you those teams would be fighting for the top 3 spots at one of the recent Pan Am Championships.

So are these handball success stories a model to follow or are they just interesting anomalies in the handball geography of the world which is predominantly centered in Europe? Well, in a way, they actually demonstrate that the sport can become popular in some unlikely places. Unlikely as these hotbeds of handball are mostly surrounded by other countries where the sport barely exists. But such extension is neither cheap nor easy. More than anything, it is a minor testament to the soft power and financial investment that metropolitan France has projected onto these distant dominions. There is almost no independence movement in these islands for a number of reasons. France treated these citizens well, made them feel French to a large extent, and developed their internal infrastructure much more than one would expect on their own. And a small aspect of this infrastructure is easy access to gyms, coaches and equipment for the sport of handball.

But it is clear that this investment has had a significant impact on the world of Handball, particularly in France. Imagine their national team of the last decade without players like Richardson, Abati, Dinart, Narcisse and Sorhaindo. They would still be good, but I don’t think we would be talking about the same number of World and European titles.