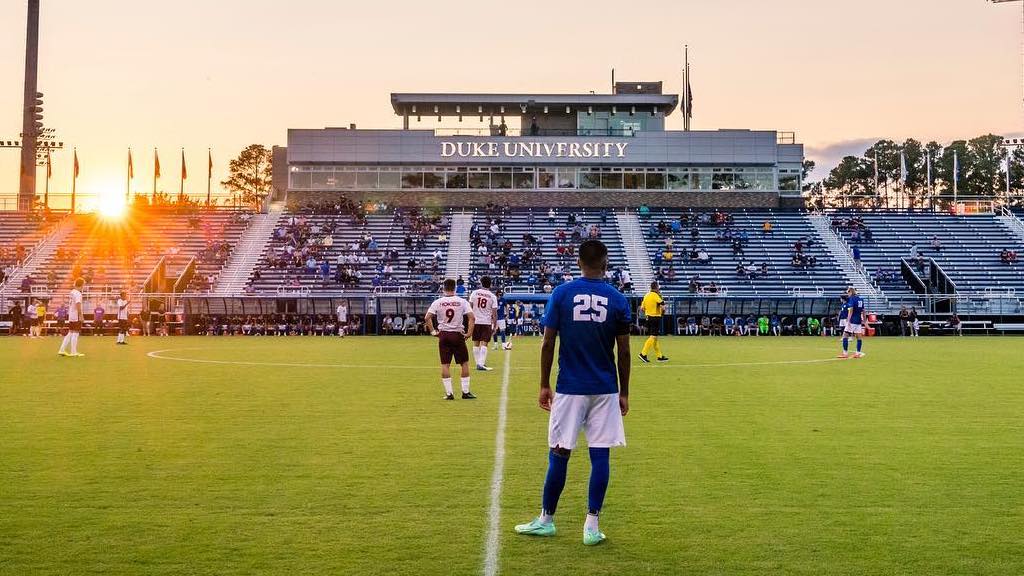 “We are very pleased to welcome this talented group of freshmen to the Duke football family,” Kerr said. “These dynamic players give us depth in every position and bring a wealth of playing experience at a very high level. We look forward to working with these quality young men this fall!”

The new additions come from prolific academy and club football backgrounds, as the Blue Devils seek to add to a team that was ACC Co-Coastal Division champions and reached the third round of the NCAA Championship the last season.

Before Duke: Participated in New York City FC Academy, starting as a guest player in 2018… Offered an amateur contract to compete with NYCFC’s inaugural MLS NEXT PRO team in the second tier of American professional football… Played defenseman center and served as team captain…Was a regular participant in early NYCFC team practices…Active competitor with the United States National Youth Soccer Team…Named U-20 reserve for the team’s international tournament in Mexico … Invited to national U-17 men’s national team training camp to prepare for U-17 World Cup (postponed due to COVID-19) … Been to Tried with Liverpool FC U-15 team in March 2018… Prior to NYCFC, captained New York Starts Premier Galaxy, winning 2018 National Club Championship… Competed for Trinity High School, leading the team to a New York State Prep Championship in 20 18… Named All-Ivy Prep League winner as a freshman and sophomore.

Before Duke: Competed in the Sheffield Wednesday FC system and professional development league in both U18 and U23 action… Developed a reputation as an elite goalscorer with the club, leading the team in goals for the past four seasons … Served as team captain for the U18 team during the 2020-21 season… In 2019, was part of the runners-up squad in the U18 LFE pre-season tournament… Helped lead his team to a tournament victory Youdan in 2018… Also competed for his high school before Sheffield Wednesday, leading Wickersley to four consecutive South Yorkshire Cup championships from 2015-18… Also helped Wickersley reach the English Schools Cup semi-finals in 2017.

Before Duke: Competed for next MLS team Bethesda SC, starting his first season with the academy in 2014…Helped the U-17 team reach the quarter-finals of the next MLS playoffs in 2021…Winner of three years in football at St. Albans…Named All-American in 2021, helping lead St. Albans to a DC State Championship…Named 2021 DC State Player of the Year…Two-time selection in all conferences in 2019 and 2021… Scored 16 goals and eight assists for St. Albans… Nominated for 2022 DC Gatorade Player of the Year Award… Active member of the Black Affinity Group and Jack and Jill, while doing also volunteering at DC Central Kitchen and A Wider Circle.

Before Duke: Spent his entire youth career with Fylkir, starting at age five…Made his professional debut with the club in 2020…Made 11 appearances for the club during his time at Fylkir…Helped lead his side to a Championship Iber Cup youth football in 2018… Was also an active handball player, playing the sport from 2012 to 2016… Received outstanding academic honors from the Commercial College of Iceland… Also obtained outstanding academic honors from Vardur Insurance Company in economics and Price Waterhouse Coopers in financial accounting.

Before Duke: Most recently, he competed for New York FC II of the MLS Next Pro… Joined the team after a stint with USL Championship side Hartford Athletic, where he recorded seven professional appearances and scored one goal… Came at New York Red Bulls academy, competed by New York Red Bulls II in 2020…Made eight appearances for the club and played 455 minutes…Recorded multiple appearances for the United States U-15 national team scoring one goal and earning 10 caps… was ready for camp with the U-17 team before the COVID -19 pandemic… Won several trials with renowned international clubs, including Arsenal, AS Roma and Borussia Mönchengladbach … Also spent time with USL League Two FC Motown, making 14 appearances and registering six assists.

Before Duke: Competed for USL League One team North Carolina FC… Entered the North Carolina FC academy, competed with the club from 2016-2022, while also making several appearances for the U-23 team of the team… Made his professional debut with North Carolina FC on October 1, 2021, against Toronto FC II… Is set to join his father and head coach John Kerr and older brother Cameron Kerr as members of Duke’s men’s soccer program.

Before Duke: Played for several clubs in Argentina, including Atlanta, Español, Argentinos Juniors and Ferro Carril Oeste… Played on Atlanta’s second team before the season was canceled due to the COVID-19 pandemic… Was named captain squad at Español, tallying three goals and seven assists… Won back-to-back Buenos Aires Cup championships at Español… Earned tries at Burgos and Valladolid in Spain before the COVID-19 pandemic.

Before Duke: Most recently, he was a member of the Minnesota United Academy, beginning with his first season in 2019… Competed under his father, Manny Lagos, who is the head of football operations at Minnesota United… Actively coached with first and second team Minnesota United…Finished top of the group in MLS Next fest in 2021…Previously was part of Minneapolis United, helping them win a state championship in 2018…Played high school football at the Blake School, helping the team win a state championship in 2018… Led the team in assists as a rookie and earned an All-State honor during that season… Named an AP Scholar at Blake… Also served as Admissions Ambassador.

The Blue Devils will open their season in August, with the 2022 schedule to be unveiled soon.