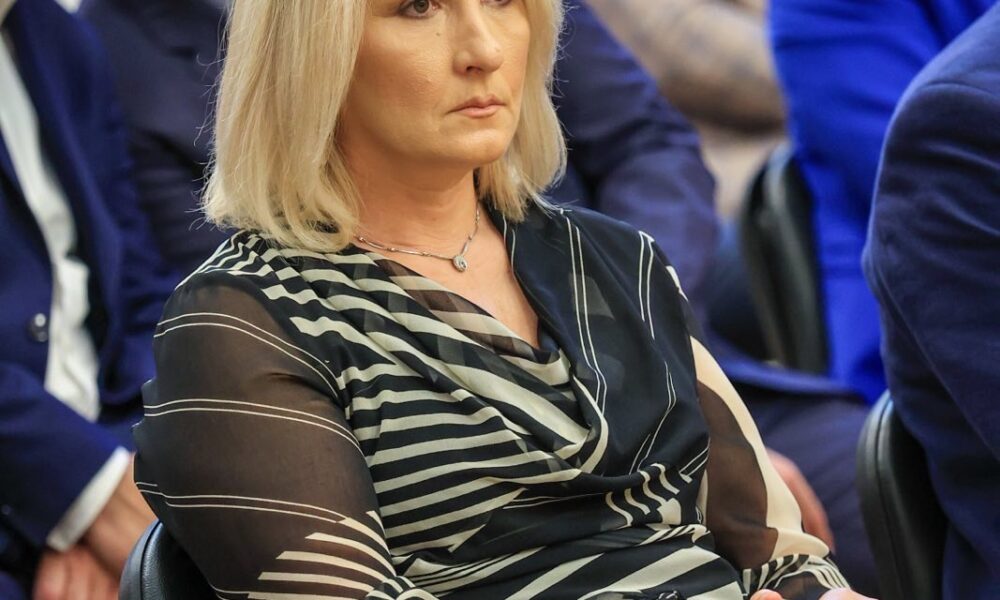 EHF EURO 2022 SERIES: “Women at the heart of the game” – Gordana Naceva

“Women at the heart of the game” is a weekly series in preparation for the Women’s EHF EURO 2022 and features former stars who have changed roles. In today’s second episode: Gordana Naceva.

The Women’s EHF EURO 2022 is slowly approaching and from November 4-20, all eyes will be on 16 teams competing for the trophy in Slovenia, North Macedonia and Montenegro. It will be the second time that North Macedonia hosts the European Championship and for the 15th edition of the EHF EURO, legendary goalkeeper Gordana Naceva has been chosen as ambassador.

Gordana Naceva has been part of North Macedonia’s greatest sporting success. His name is inscribed in the history of handball. Once a talented goalkeeper, captain of the European champions team Kometal Skopje and the women’s national team, now a strong woman in sport, a law graduate and a fan of handball.

Naceva has always had an interest in sports, but handball was not her first love. When she was young, she enjoyed playing basketball on the streets of her neighborhood and transferred that love to the field at school. As a playmaker, she loved to score points but there was no women’s club in Sveti Nikole, her native village. The only women’s club in the city was the Handball Club Ovche Pole. That’s how it all started.

“Like in basketball, I wanted to play and score. In practice, there was no goalkeeper, and since I was the youngest player there, they told me that I had to stand between the posts. I managed to save a few shots and the coach told me I looked good and left me there. The rest is history, the six-yard box is become my life. Handball has become my life,” says Naceva.

“Sometimes you don’t know where life will take you. I ended up as a goalkeeper, a very important role in handball, although I never thought about it. Goalkeepers can correct the mistakes of the defense and in a way decide the game, which has really shown in recent years,” adds Naceva.

For four years, Naceva was playing in her hometown, trying to perform at her best on the pitch when she received a call from DIN de Nis. A club that has changed its approach to handball.

“I moved to DIN Nis when I was only 17, still in high school. By moving to such a club, I progressed two leagues playing in the Yugoslav First League. From third goalkeeper, I am became the first. I worked hard. That’s where I improved my goalkeeping technique. I spent four wonderful years there,” she recalls.

“Thanks to the performance for the DIN, I was part of the junior national team of Yugoslavia and also on the senior team list for the Olympic Games in Barcelona in 1992, but the team could not to participate because of the events in the country. For me, it was amazing because I had the chance to play with players that I looked up to as role models: Svetlana Kitic, Natasa Kolega, Dragana Pesic, etc. Naceva said.

Her goalkeeping skills did not go unnoticed in Europe and she was open to trying her hand outside of Yugoslavia until a call from Skopje-based club president Gjorche Petrov. He had the ambition to have a great women’s club, ready to play in Europe’s top competition and when you call home it’s hard not to say yes.

“Women’s handball in our country was not at a high level at the time, but the president Gjorche Petrov said he wanted to play the EHF Champions League and he wanted me to participate “For me, it was amazing to hear. But sometimes you have to dream big. My parents also wanted me to come back because things started to change in Yugoslavia,” says Naceva.

A decision can have such a huge impact on a person’s life and set the course for years to come. Naceva is happy to have made this decision even though at the time she could not predict what was to follow.

“Imagine what a blessing it is to be part of your country’s greatest sporting success. Few players can achieve this. We won the Champions League trophy in our country, our city, in our fortress “Kale”. We had such a welcome when we returned from the World Championship in 1997, and resounding support at the following EHF EUROs.

“Women’s handball in our country started in 1997 and we finished seventh in the World Championship. We had a reception as if we were champions. We won against Denmark, Olympic gold medalists. I remember when we got back to Skopje, I saw police lights behind us and I thought: Are they really scaring us away now? I didn’t know they escorted us to the reception. He followed with three eights – to two EHF EUROs and another World Championship. We were fan favorites,” says Naceva.

“On the club side, it all started in 2000 when we beat Hypo Niederösterreich in a home game. He caught the eye of Trifun Kostovski; he became our sponsor and our biggest supporter. We had to take a year off from European competitions, but when we came back we won the Champions League against FTC Herz Budapest.

“May 19, 2002 is the day I will never forget in my life, I still remember it every second. We played well in Hungary and only lost by two goals. During the rematch, the Arena was packed, the atmosphere was hot and we were on top,” recalls Naceva.

Gordana Naceva ended her professional career in 2004 and knew from the start that she wanted to do something related to her law degree. Her first job was in the Ministry of Finance until she gave birth to her daughter, Mia. Over time, Naceva realized that he missed handball and wanted to connect the sport with his knowledge.

“My first role was director of the national team and I loved this job, I enjoyed every moment spent with the team. I was also the first female EHF delegate from North Macedonia, but all that led to the role I still hold today, chairman of Vardar. I managed to balance work and family. To this day, my daughter Mia supports my work, when Vardar was top of the Champions League and now when we play in the national championship with young talents from our country,” explains Naceva.

The Macedonian goalkeeper tasted EHF Champions League finals as a player and took part in five EHF FINAL4 tournaments as president of Vardar. Women’s handball in North Macedonia had glorious moments and great successes before it hit rock bottom. However, things are starting to change as more and more handball enthusiasts are working in different fields, promoting women’s handball.

“Unfortunately we don’t have continuity to save brands in sport, we don’t have Kometal or Vardar in women’s handball, both clubs very successful. Finances have an influence on that, and we must be more determined to invest in the development of the sport. Enthusiasm, vision, ambition and clear objectives are very important for this. Women’s handball hit its lowest level five years ago, and it has started to come back, slowly,” explains the legendary keeper.

“The EHF EURO Group C, which will be played in Skopje, is another great chance to raise women’s handball to a higher level, to put the sport in the spotlight and to bring little girls to interest in handball more. Sport is the best thing that can happen to a child, and I would like parents and children to hear that. Sport can teach you so many things. That’s why this competition will have wind in your the wings for all of us in women’s handball to do something better,” says Naceva.

“An added bonus is that we can promote our country, our culture and show what we can offer. We want all teams to enjoy their stay.

Director of the women’s national team, first female delegate of EHF North Macedonia, member of the EHF women’s handball board and of the EHF women’s national team committee, guest at the UEFA anti-violence conference, vice-president of the Women Forum Club Handball, executive member of the Olympic Committee of North Macedonia, sports ambassador of the European Week of Sports – some of the sporting events that Naceva has organized in previous years .

Currently, she is the president of the Vardar women’s club, a member of the executive committee of the Handball Federation of North Macedonia and a member of the “Gender Equality in Sports” program sponsored by the Olympic Committee.

“Analysis has shown that there are less than 1% of women in sport in important positions. I believe that if we want to improve women’s sport, there should be more women with key roles allowing them to take decisions. That’s why I agreed to be part of this group, a group of passionate women working as volunteers, trying to make a difference. Women’s sport should go hand in hand with men’s sport – men are our partners equal to achieve the same goals and sporting development on both sides,” says Naceva.

All her efforts, love and passion prove that she is a real woman at the heart of the game. That is why the Handball Federation of North Macedonia did not hesitate to choose Gordana Naceva as an ambassador for the EHF EURO 2022.

“For me, it is an honor to have been chosen as an ambassador. Promoting your country and our sport at such an event is a great accomplishment. Be part of the EHF EURO again. The last time North Macedonia hosted was in 2008, and I had already finished my career, so I missed the opportunity to play the tournament in front of our fans. That’s why I will go the extra mile to give people a good time here.

2022-09-23
Previous Post: Kilkenny GAA and gardaí team up to tackle drug use
Next Post: High-flying Millers down-to-earth as they are held down by visitors from the bottom of the table | Soccer | New