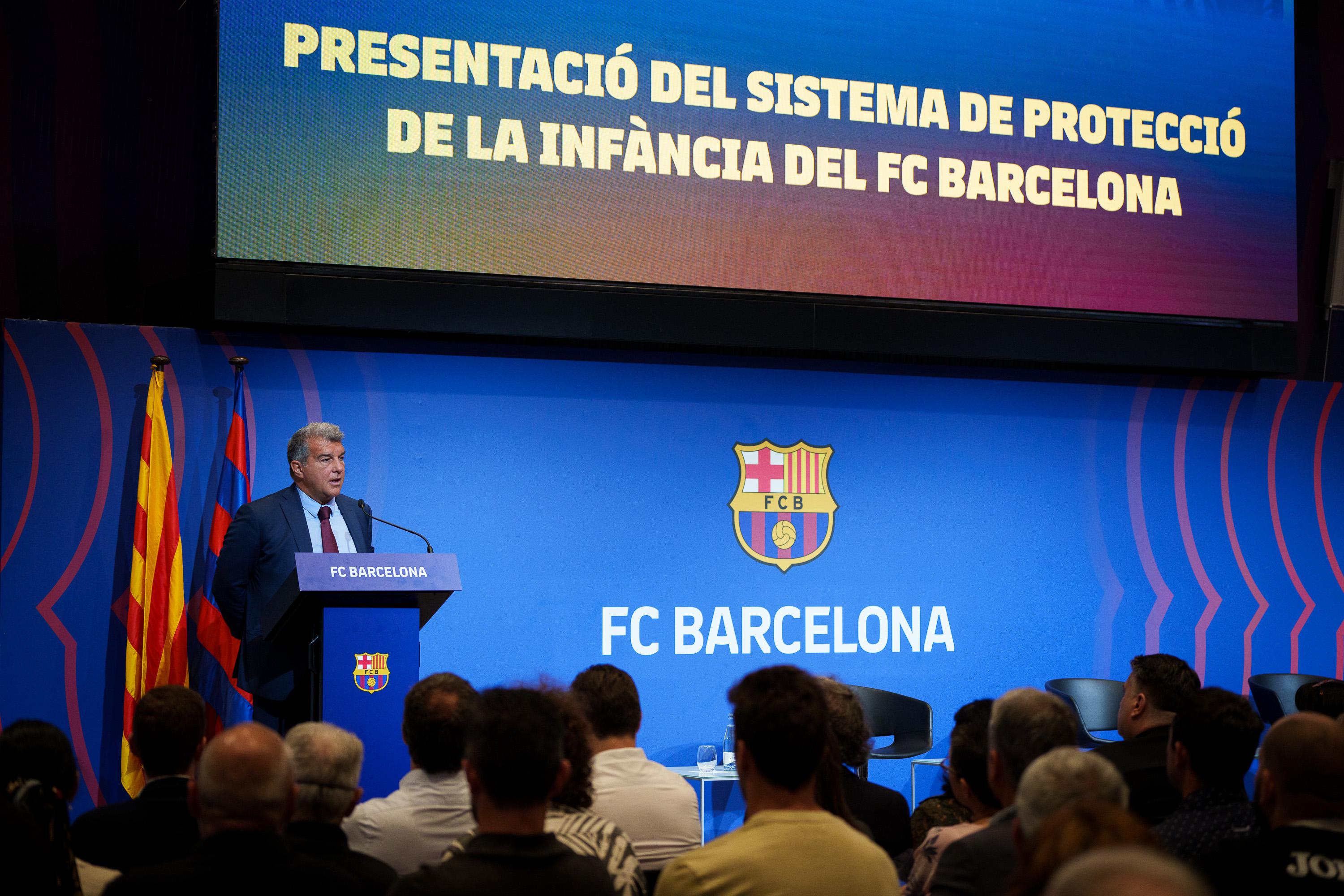 FC Barcelona presents the club and foundation’s child protection system, the first of its kind in Spain

FC Barcelona presented its FC Club and Foundation child protection system, the first of its kind in Spain, which directly or indirectly covers almost 200,000 children and young people from the different areas in which the Club (La Masia , Barça Academy, amateur sports) and the Foundation operate. This system includes the new protection policy, the action protocol and other actions for the prevention, monitoring and management of all types of violence: physical and verbal abuse, sexual abuse, neglect and intimidation, with the aim of promoting a zero tolerance space, safe spaces and protective spaces.

The President of FC Barcelona and its Foundation, Joan Laportaaccompanied by the General Secretary for Sports and Physical Activity of the Government of Catalonia, Anna Caulapresented this child protection system last Thursday at an event held at Auditori 1899, which was also attended by the general director of the FC Barcelona Foundation, Dr. Marta Segu, the Club’s Chief Compliance Officer, Sergi Atienzapsychologist and consultant at the Espirales children’s consulting firm, Francisco Javier Romeo; and the international child rights expert and former Head of Children’s Rights and Sports Values ​​at the Council of Europe, Elda Moreno.

The objective of the device is to guarantee the overall well-being of all these children and adolescents who are part of the Club and the Foundation. To achieve this, efforts are made to ensure that all safe and protective spaces and environments are child-rights driven and in the best interests of every child and adolescent.

It should be mentioned that the Special Representative of the Secretary General of the United Nations on violence against children, Dr. Najat Maalla M’ijd, participated in the event through a video in which she congratulated the Club for this initiative and encouraged other sports institutions and clubs to set up similar systems.

The culmination of a long project

Historically, FC Barcelona has always been mindful of personal well-being, especially that of children and adolescents. The 2017/18 season saw a deepening of child protection through the creation of the first risk policy in sports with minors, and the launch of specific annual training sessions for internal staff in this area. In recent seasons, the system has evolved, as it has been implemented in different groups and projects and adapted to the various legislative innovations that have occurred in recent times. Thus, this protection project, launched three seasons ago, now results in taking into account the regulatory and legal developments of recent years and in extending the functions of protection delegates and consultants, a function integrated into each team. in the different fields of action of the Club, and whose mission is to implement all preventive actions and monitor any situation of risk or vulnerability that may arise.

In recent years we have worked alongside the children’s consultancy Espirales, an organization specializing in child protection, made up of internationally renowned professionals in the field, and which has collaborated with organizations such as the National Council of Sport, UNICEF, the Council of Europe, etc., in our commitment to align the project with the highest international standards in the field of child protection.

This pioneering child protection system complies with the protocols of the most advanced national and international social organizations in this field, which positions FC Barcelona and the Foundation as leading sports organizations. Therefore, with this public presentation, FC Barcelona wants to make visible and transparent this protection system and all the measures and protocols it includes. Any person, business, entity or organization wishing to participate in any Club or Foundation activity involving children and young people must comply with this Child Protection System.

The scope of the system encompasses the prevention of all types of violence and applies to all FC Barcelona groups in which children and adolescents participate:

The Child Protection Policy is the general framework that describes the actions and measures applied in this area. These can be grouped into four main blocks:

Statements by Joan Laporta, President of FC Barcelona and of the Foundation

“Talking about issues such as physical or verbal aggression, bullying, neglect or, above all, sexual abuse have always been taboo subjects in our society. However, FC Barcelona, ​​as an organization that stands accountable to the society to which he belongs, wants to improve the prevention of any type of violence against children and young people who participate in any activity of the Club or the Foundation, and we want to go further, because it is a question which concerns us and in which we also want to be leaders”.

“The Club has always protected its children, following the regulations or exceeding them at times where it has been a pioneer, as in the case of the launch of La Masia, and we will also be a pioneer now with this ground- break the protection system in our country”.

“The main objective of this protection system is to guarantee the overall well-being of all those children and adolescents who are part of the Club and the various projects of the Foundation”.

“One of the main strengths is ensuring that all spaces are safe and protective environments, focused on children’s rights and the best interests of every child and adolescent.”

Statement by Sergi Atienza, Director of the Compliance Department of FC Barcelona

“In recent years, changes in regulations and laws have meant that since the 2017/18 season, we have launched this project to set up a system to protect children and young people who participate in Club activities and of the Foundation, in all their sections and sports. We can now present it because we have defined a complete system with its own policy and its own protocols which allows us to go beyond the main objective of protecting our children”.

“Making all these policies and protocols public is a key part of prevention. Because this transparency reveals all the standards and protocols we have in place at the Club to prevent any form of violence against our children. Any person, company, entity , etc. . must adapt to them and we will show them to everyone”.

2022-06-09
Previous Post: Uganda Handball Super League 2022 set for colorful kick off
Next Post: Najma arrives in the handball final of the Gulf clubs | THE DAILY TRIBUNE