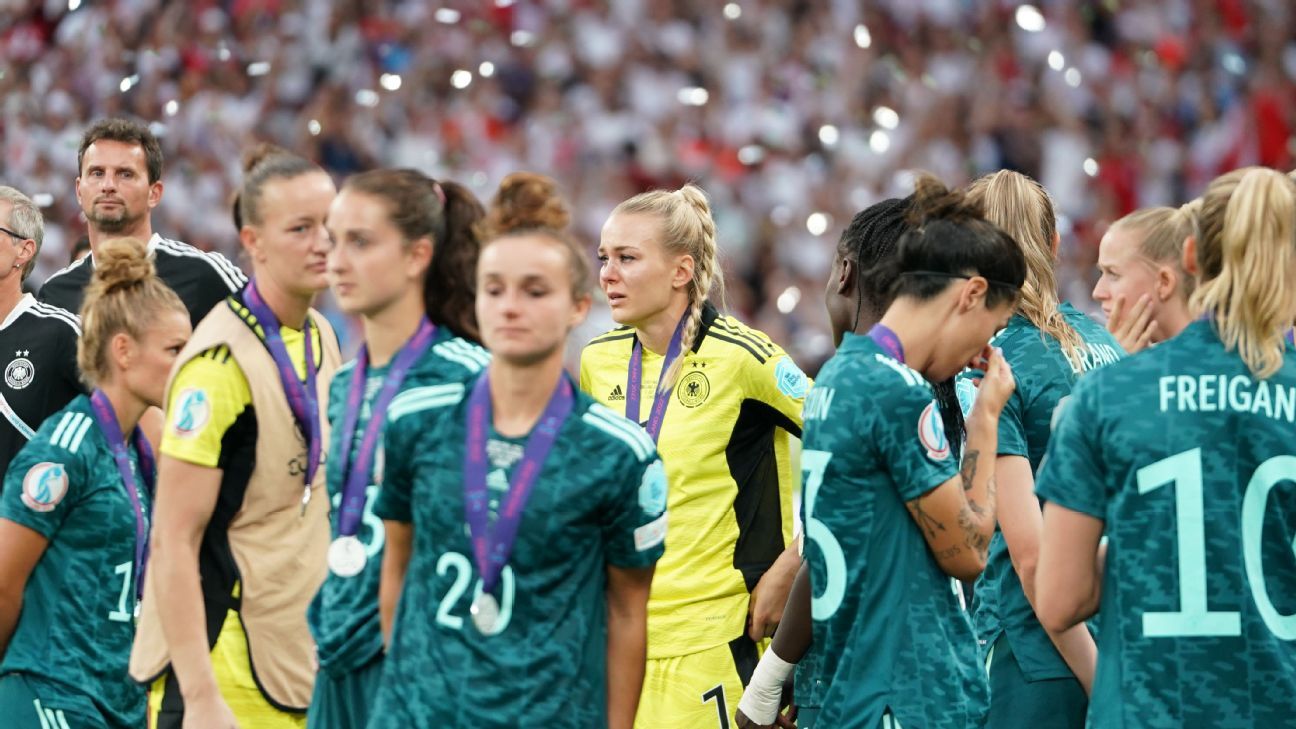 Interest in women’s football in Germany is down – according to the German Football Association (DFB) – the number of women’s teams has (approximately) halved since 2010, the number of spectators in the Frauen-Bundesliga n isn’t growing and even for the women’s national team, attendance has been plummeting for years. The data is usefully presented in a DFB brochure in which the lack of visibility and of women in positions of power within the federation are also noted. Brochure (“Frauen im Fussball Fast Forward“) outlines a five-year plan to increase the number of women in sport, from players to coaches to referees to those in the leadership of the federation.

– Hamilton: England victory is a platform to inspire the next generation
– Ogden: England won, but football is the biggest winner this summer
– Highlights: England beat Germany to win Euro 2022 (USA)

While we have seen other governing bodies institute a full-time model for the upper tiers of their respective leagues – the English FA with the Women’s Super League, the Italian FA (FIGC) with Serie A and the Spanish FA (RFEF ) with Liga Ellas – the nature of 50+1 means that the DFB cannot simply tell all Frauen-Bundesliga clubs that they have to be full-time. Indeed, there are limits to what the federation can do beyond incentives and investments.

Speaking to ESPN after the final, DFB national teams director Joti Chatzialexiou insisted on the need for clubs to want to improve their women’s programmes. “It’s more about the clubs, they have to do it by heart and not saying you have to do it. It’s something my grandfather always told me: if you do something by heart, you will do it perfectly, that’s why we can’t go to the clubs and tell them they have to do it. We have to find solutions together.”

Whether or not Opa Chatzialexiou was a fan of women’s football is unknown, but for those in the world of women’s football, far too many clubs have been forced to run a women’s team with players receiving the bare minimum from their owners. disinterested or abused. And that’s never the recipe for success.

Ahead of Sunday’s final, coach Martina Voss-Tecklenburg insisted on the need for a lasting impact from the tournament, whatever the outcome. As we wake up on Monday, the mere fact that Germany lost 2-1 to England at Wembley should not alter their petition for “More equal talent, better stadiums… more spectators and better kick-off times”.

As it stands, games are sporadically available outside of Germany via a subscription service, ata football, and those in Germany can watch some on Magenta Sport – which requires a German T-Mobile account – while others are selected for broadcast. The need for a better broadcast deal that almost slaps the audience with the home league is clear.

Steffi Jones and Danielle Slaton break down the key factors that separated England from Germany in their European title win.

After the Euros and Germany’s return to a major tournament final for the first time in six years, there should at least be renewed interest in the national team, with their semi-final against France attracting a television audience of more than 12 million: a market share of 47%. By all accounts, the coverage of the team back in Germany has gone down quite a bit, and maybe losing in the final will help them endear themselves to the German public again.

On Monday morning, newspapers all over Germany were splashed with headlines of ‘handball disgrace’ and England firing a quick shot at Wembley, the narrative firmly established by the media. The incident happened with the game still 0-0 in the first half, when Marina Hegering’s effort from a corner hit Leah Williamson’s raised arm. The contact was reviewed by the VAR (Video Assistant Referee), but was not considered a sufficient offense to summon the referee, Kateryna Monzul, to the screen on the touchline.

The lack of review was raised by Voss-Tecklenburg in his post-match press conference, with the coach asking for answers on the lack of communication and clarity, explaining that she would want the same if the roles had been reversed. The incident and the quotes from the coach and his players – all heavily questioned in the mixed zone after the game – were picked up by media around the world to tell the story of the German fury and the English flight.

It’s quite the thing to inspire crowds to invest their interest, especially when paired with the largely profitable football the team has been pedaling this summer.

But of course the men’s leagues are back – with an adjusted schedule for the upcoming Winter World Cup in Qatar – and keeping the women’s team fresh in the public mind will be the next task, along with the men’s Bundesliga ( kicked off Aug. 5) a natural distraction. Worse still, the next two matches on the schedule for Germany are trips to Turkey and Bulgaria in September, with the next opportunity for them to play at home not until the first week of October.

At this point, memories of Germany’s clever defensive play and focused Euro attacks will fade in the minds of casual fans.

Although the DFB may not be able to achieve its lofty goals for 2027, this summer will be a reminder that the German women’s national team which has eight European crowns, two World Cup titles and Olympic gold from 2016 just fell asleep for the past. a few years. Now they are awake again and ready to get back to winning ways. After all, we are only 353 days away from the start of the 2023 Women’s World Cup.

2022-08-01
Previous Post: Quidditch, a sport in its own right
Next Post: Giovanni van Bronckhorst slams ‘botched’ Rangers after shock loss to Union Saint-Gilloise