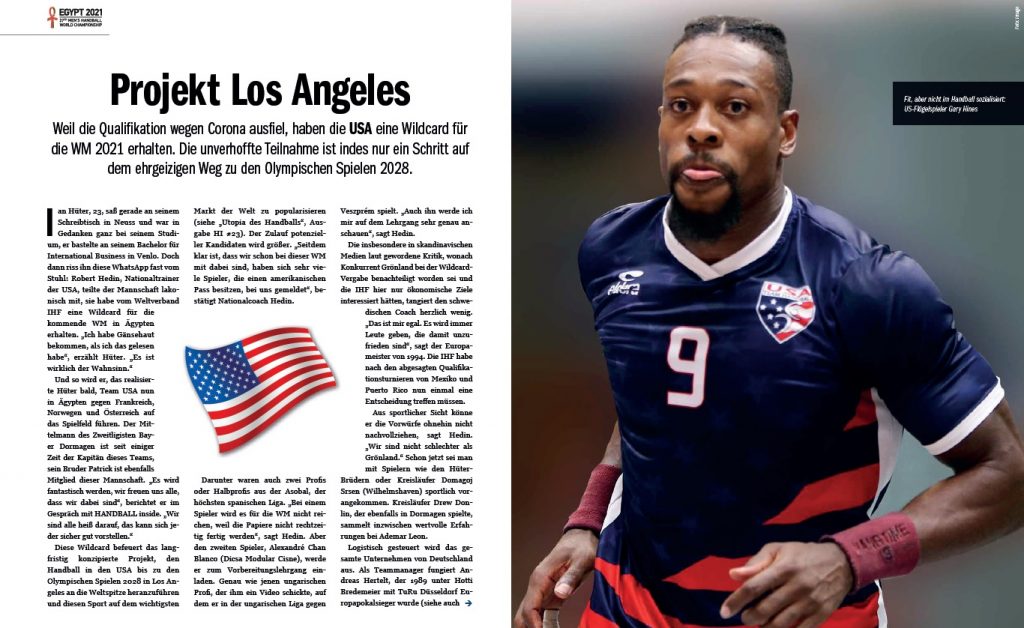 Because qualification was canceled due to the Coronavirus, the United States received a wildcard for the 2021 World Championships. This unexpected participation is just one step on the ambitious road to the 2028 Olympic Games.

Ian Hüter, 23, sat at his desk in Neuss and was completely immersed in his studies. He is working on his bachelor’s degree in international business in Venlo. But then his WhatsApp almost knocked him out of his chair: Robert Hedin, the head coach of the United States, briefly informed the team that they had received a wild card for the upcoming world championships in Egypt from the IHF. “I got goosebumps when I read that,” says Hüter. “It really is pure madness”!

And so, Hueter realized, he will soon lead the American team on the field in Egypt against France, Norway and Austria. Second division centre-back Bayer Dormagen was the team’s captain for a time and his brother Patrick is also a member of the team. “It will be fantastic, we are all just happy to be part of it”, he reports in an interview with HANDBALL inside. “We are all crazy about it, everyone can easily imagine it.”

This wildcard fuels the long-term plan to take handball in the United States to the world level by the 2028 Olympic Games in Los Angeles and popularize the sport in the most important market in the world (see “Utopia of handball”) , Inside Handball Edition #23). The influx of potential applicants is increasing. “Since it became clear that we will already be at this world championship, many players with an American passport have contacted us,” confirms national coach Hedin.

Among them were two professionals or semi-professionals from the Liga ASOBAL, the top Spanish league. “For one of the two players, the world championship will not take place this time, because his passport will not be ready in time”, explains Hedin. But he will invite the second player, Alexandré Chan Blanco (Dicsa Modular Cisne) to the preparatory course. Another will be a Hungarian pro who sent Hedin a video of himself playing against Veszprém in the Hungarian league. “I will also watch him very closely during camp,” says Hedin.

The criticism, especially in the Scandinavian media, that Greenland didn’t get the wild card award because the IHF was only interested in economic goals, has little effect on the Swedish coach . “There will always be people who will not be happy with it”, assures the 1994 European champion. The IHF only had to make a decision after the cancellation of the qualifying tournaments in Mexico and Porto Rico.

From a sporting point of view, he cannot understand the allegations anyway. Said Hedin, “In comparison, we are no worse than Greenland.” With players like the Hüter brothers or the circle runner, Domagoj Srsen, (Wilhelmshaven), we have already made progress. Circle runner Drew Donlin, who also played at Dormagen, is gaining valuable experience with Ademar Leon in the meantime.

The national team is logistically controlled from Germany. The team leader is Andreas Hertelt, who won the European Cup in 1989 under Hotti Bredemeier with TuRu Düsseldorf (see also questions in Handball Inside Edition #29). Hertelt is looking for ways to organize the training camp originally planned in Norway. “It looks like we will all meet in Denmark in early January,” says Hedin, explaining the current situation.

Hertelt, who lives in Krefeld, is also trying to quickly find additional sponsors for the World Cup. A major sponsor has been on the jersey since January: the American communications company Verizon. Its CEO, Hans Erik Vestberg, was formerly the president of the Swedish Handball Federation. In the long term, acquiring sponsors should also be easier, as the IHF Council has already decided to provide Team USA with a wildcard for the World Championships in 2025 (in Croatia, Denmark and Norway) and 2027 (in Germany) to help the team be more competitive at the 2028 Olympic tournament.

Also included in the American project is Stefan Bögel from Solingen, who previously worked as a player’s agent in the Bundesliga but is now mainly responsible for the women’s second division team HSV Solingen-Gräfrath. Bögl specifically coordinates the scouting of younger age groups eligible for the 2028 Olympics, today’s A and B players (16-19). “The prospect of competing in the Los Angeles Olympics is extremely tempting,” says Bögl.

When they showed up with an American team at the Sauerland Cup in January, many young American passport holders had already approached him. Unfortunately, the coronavirus pandemic has prevented further testing. A planned training camp in Luxembourg has been cancelled. “A lot of things have been destroyed by Corona,” complains Bögl, who points out that the American association does not find players with money. “We are not Qatar, which has naturalized ready-made professionals with lots of money,” he says.

“For a long time, many players even had to pay for their transatlantic plane tickets themselves,” says Bögl. Ian Hüter confirms this. Yes, that happened in his early days with the program, specifically during training camp in Alabama. “We paid for the flight to Atlanta ourselves,” he says. “But for the PANAM Games in Lima in 2019, the Federation paid all the costs.”

Even before the surprising wildcard at the beginning of November, the American federation was testing highly talented juniors. Hedin has high hopes for Luke Bolte of Tiffin, Ohio. The 20-year-old pivot, who is 1.95 meters tall, weighs over 100 kilograms and has the perfect physique for handball, made his debut in the Sauerland Cup. Bolte will also attend training camp ahead of the world championships, Hedin said.

But above all, there is Tristan Morawski, 15, a very promising left back whose father played for the Polish national team and who does not hesitate to aim for very big goals: “I want to become the Michael Jordan of handball . “, announced the teenager of more than two meters during a conversation with Olympic Channel. Hedin says he thinks it’s good when kids set high goals. But for the world championships in Egypt, Morawski will not be able to participate. “The age limit is 16.” Kailan, Morawski’s 13-year-old brother, is also considered to have excellent talent.

Tristan Morawski also made his Sauerland Cup debut in January playing for the USA U19 team at the age of 14 and has been even more motivated ever since. “I want to be the best,” he says, emulating his role model, Mikkel Hansen. “I want to play in the Olympics, win gold and be MVP.” He dreams of handball being as popular as basketball in the United States in the not too distant future. It is his goal to expose handball to a wider audience, Morawski said.

But initially, he will also benefit from the support program set up by the Forum Club Handball (FCH) to provide handball training for talented hopefuls. The association of major European top clubs spends a total of seven figures on it, its chief executive, Gerd Butzeck, told this magazine two years ago. German goalkeeper René Ingram is now with IFK Kristianstad, and talented goalkeeper Nico Robinson moved from top division TuS Dotzheim to Elverum last summer.

The circle runner, Bolte and Morawski must be trained at the SG Flensburg-Handewitt Academy. “I can’t even express how much I’m looking forward to it,” said the young southpaw. “I can hardly wait.” Exactly the same development is planned for female talent, as the US women will also have a team at the 2028 Olympics in Los Angeles.

The idea behind the training program is that sustainability is only possible if American prospects are fully immersed in the handball environment associated with a top club. It would be a mistake to rely solely on athletes like winger Gary Hines, who played for a long time in the 3rd division at HSC Bad Neustadt and who, at 36, is ending his career with Bögel’s hometown club Solingen. -Gräfrath while focusing on his coaching education. “Gary is incredibly fit,” says Bögel of the man who has already proven his physique several times on the RTL show “Ninja Warrior Germany”. “But, of course, you can say he didn’t play handball in his youth.”

A strong American team for Los Angeles is one thing. “The other thing is that handball has to grow in the United States,” Hedin says. “At some point we need a league system in the United States that also generates a presence in American media.” Jean Brihault, the former president of the EHF, who also sees opportunities in university sport, has been working in this direction for more than two years (see Interview in Handball Inside Edition #23: Translation). Initiatives like this have, of course, taken place in the past: the successful participation of the American team in the Munich Olympics in 1972 failed, as did the international match between Germany and Poland, which the German Horst-Dieter Esch, who was then in charge of USA Team Handball, played and organized in Chicago in 2010. In any case, there is a lot of work ahead of handball developers in the United States.

In Egypt, however, as all involved know, they will have to aim a little lower. “I’m afraid we’ll get some very hard knocks in the face at the World Cup,” Bögel suspects. “It won’t be enough for France and Norway,” Hedin says, laughing out loud over the phone. We will probably end up in the Presidents Cup, in which places 25 to 32 will be determined. “Our goal is to win USA’s first game at the World Championships,” Hedin said. “Every game at this level is important for our development.”

Captain Ian Hüter regrets not meeting injured legend Nikola Karabatic on the Giza pitch. “But there are also a lot of other great players that we will face, like Sander Sagosen,” he said. He is especially looking forward to meeting the double French world champion Kentin Mahé, trained as Hüter in Dormagen. “Kenny even went to the same school I did back then,” says Hüter, “and when I was a kid I stood in the stands when he played. Of course I looked up to him.” Maybe that in Giza there will be an opportunity to chat with his former idol from Dormagen, or even surpass him and score a goal.

Thanks to Erik Eggers for providing a copy of the article and to Christa Ingram who helped translate it.