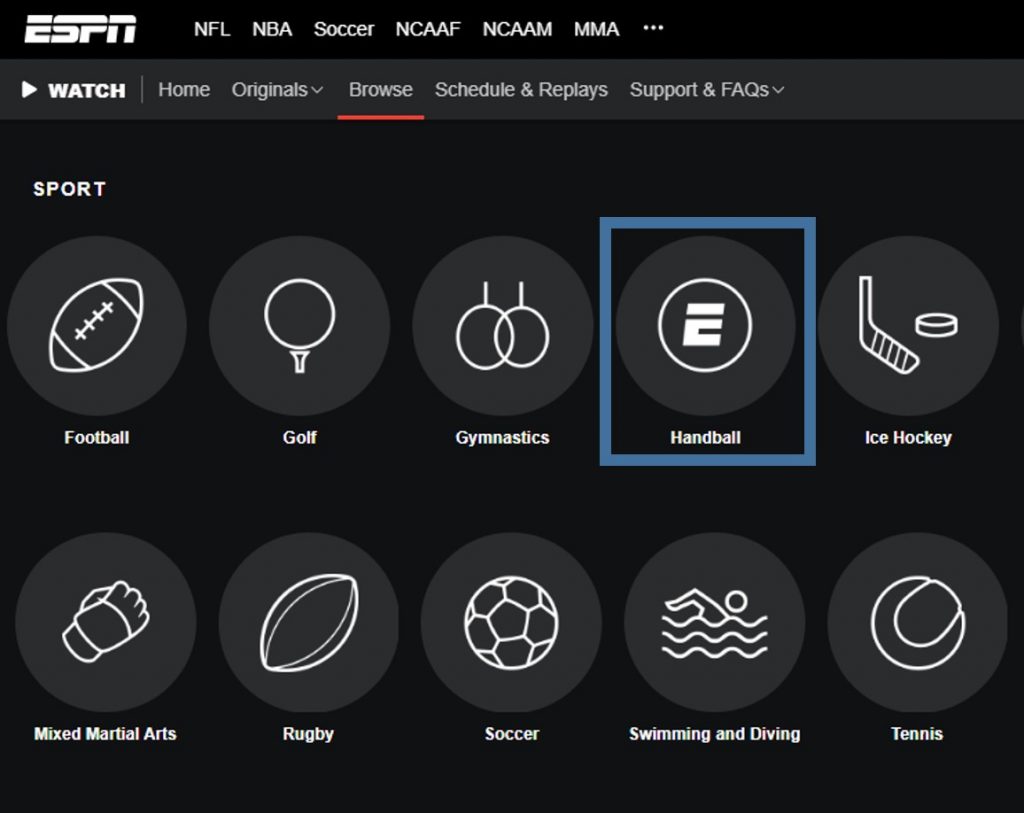 As we are about halfway through the IHF Men’s Handball World Championships, I thought it might be time to review the ESPN+ Handball web streaming product.

Overall, the viewing experience was pretty good, albeit with a few hiccups. For me personally, watching streaming content is a lot like watching regular TV. Occasionally I will get a bit of buffering or pixelation, but overall the picture quality is outstanding and better than what I get from YouTube. I watched through the ESPN+ app on Roku and it’s a lot like watching Netflix or Amazon Prime for me.

There were some issues with the audio as sometimes the English commentary track was missing. Usually only a few minutes at the start of the first game, but on the 19th he disappeared all day for some reason. I tweeted at @espnfansupport, but maybe a few more voices were needed to bring the issue to their attention.

Finding the matches was also a bit difficult at times. Most notably, upcoming handball matches do not appear in the app’s upcoming matches section until maybe 5 minutes before the match starts. This led to my dismay and others messaging me “where’s the game?” when there’s nothing to watch on the handball-related ESPN+ app.

A disappointing lack of promotion (so far)

As someone who trumpeted ESPN’s broadcast of handball as largest and most significant development in the entire history of team handball in the United States let’s just say that so far the promotion of the sport has been disappointing. (For a fun discussion of my expectations and the resigned perspective of another longtime sports fan (Chris Cappelman), check out this Facebook discussion: Link).

I guess my expectations were directly tied to how ESPN hypes and promotes the sport on their hugely popular social media channels. Most notably, two Sports Center Instagram posts (link 1 and link 2) from 2017 and 2018 are possibly the most viral handball-related posts in US history. Simonet’s behind-the-back shot got 1.2 million views and Sigurdsson’s shot on goal got 2.2 million views. My logic: Wow, if ESPN was doing handball when it wasn’t even airing on ESPN, imagine what they’ll do when it’s their content. (Background stories on ESPN messages: Link 1 and Link 2).

And, going back further in time, who can forget the attention that Scott Van Pelt and others brought to the sport during the 2012 Olympics: Link

Again, I kind of thought that if ESPN radio was excited about handball when it aired on NBC, maybe they would be really excited when it was their own product. At the very least, I thought they would talk a bit about handball while it was simulcast on ESPN+. Interviews with American coaches or players. Maybe a discussion of Gauthier Mvumbi’s viral videos and a Shaquille O’Neal shoutout? Instead, I didn’t hear a beep. Heck, sometimes it feels like handball was still on beIN Sports.

We’re only halfway through the championship though, so it’s time for things to pick up. Let’s also not forget that the withdrawal of the United States from the tournament was a huge setback. First, it even worried me for a short while that ESPN wouldn’t be showing any games. It also didn’t help that the NFL playoffs were in full swing. After Sunday’s conference finals, there’s a two-week lull until the Super Bowl. And, at the same time, the world championships really start with the quarter-finals, the semi-finals and the championships on the 31st when there is no soccer on TV. Yes, things could definitely improve.

While I would much rather see the World Championships aired on ESPN’s linear channels where it would reach virtually every home in the United States, there are certain advantages to being on the lower profile, web-streaming-only, ESPN +.

A targeted audience: The first advantage is that this smaller audience is also very, very sporty. Or, to put it another way, the type of sports fan who would be more inclined to watch something they may have never seen before or maybe just once or twice during the Olympics many years ago years. Additionally, they are more likely to become a bigger fan of the sport. And, if they’re young enough, they might even investigate to find out more about the possibility of playing the sport.

A home for more handball content: This ties into another benefit of ESPN+. Namely, it could become a home for additional handball content. Suppose these new fans want to continue watching handball. Many of these potential new fans probably think they will have to wait for the next Olympics or World Championships. After all, it’s just a game invented by a physical education teacher. Well, what better way could there be to educate those new fans about the wonders of the EHF Champions League than putting Champions League matches on ESPN+ (ATTN ESPN: These rights are available) Or, what about adding American content like our National Team Matches or Collegiate National Championships. Think what recruiting tool this could be? Why imagine an intramural star at Wake Forest watching North Carolina play Virginia in the Final Four of Collegiate Handball and instantly thinking, “We could kick those guys’ ass.”

Content forever: And that leads to handball’s ultimate advantage on ESPN+. The fact that streaming services are not limited by hours in a day. During the scorching days of summer, when there’s nothing new on TV, handball might still be on ESPN+ waiting for someone new to find out. New fans, new players, new sponsors, not just for two magical weeks during the Olympics every four years. But, a trickle to come at any time of the year. Here’s what that handball substring might look like:

A better handball icon is needed

It took a while, but ESPN finally added handball to its list of sports on the ESPN+ app.

Unfortunately, this is not the best handball icon or logo, just a placeholder. Maybe we can help ESPN with a better icon. There are several examples from other sports for comparison. But, it’s actually a bit tricky, for several reasons. One, there is the other handball in the United States, which sows confusion. And then a simple ball drawing could easily result in something that looks like another soccer ball. So we need something simple that says “our handball”. If anyone has an artistic or design talent…show us what you have.