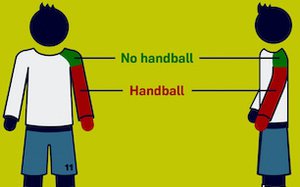 Handball or not? Even professional referees have no idea 15/09/2022

The German federation (DFB) took the surprising decision this week to call their own referees on handball decisions. In the last two Bundesliga weekends, he claimed, there had been four erroneous handball calls in the penalty area. Yes, apparently referees and their VAR colleagues at the now notorious Cologne Cellar are still wasting critical calls, despite FIFA’s endless rewriting of handball law for ‘clarification’.

1. Dortmund v Hoffenheim on September 2. The head of sport of the Bundesliga, Pierre Sippel, said that Dortmund should have received a penalty when the Hoffenheim defender Ozan Kabak blocked a cross of Marius Wolf with his arm. No sanction was pronounced.

2. Werder Bremen v Augsburg on September 9. from Bremen Marvin Ducksch hit the ball against the arm of Augsburg Maximilian Bauer from close. A penalty was given to Bremen (which they missed), but Sippel says the kick should not have been awarded as “the defender turns away from the ball. The position of the arms, although slightly away from the body , should be assessed as part of the natural movement of the body There is no clearly recognizable intention [to commit a handball offense]and also the aspect of abnormally fattening the body is clearly not the case…” The VAR, he says, should have intervened to overturn the sanction decision.

Do you have all this? Alright, let’s go.

3. Hertha Berlin v Bayer Leverkusen, September 10. by Bayer Odilon Kossounou blocked a Hertha shot Jean-Paul Boetius with his arm and prevented a Hertha goal. No penalty was given, and ref Benjamin Brand told the media after the game that he had watched the replays and stood by his decision. This is not the case, says Sippel of the DFB. “When you analyze the video exactly, then [Kossounou’s] arm is outstretched at the side of his body. The defender is facing the ball, actively in a defensive position, and the upper body is leaning slightly towards the direction of the ball. should have intervened.

4. Cologne vs Union Berlin, September 11. of the union Robin Knoche directed a ball against the arm of Cologne Luca Kilian. Arbitrator Benjamin Cortus calls a penalty. Sippel [short version]: “The defender is still jumping, with his back to the attacker and without any orientation towards the ball.” Another bad call.

Of course, you can discuss all these calls. The wackiest aspect of the DFB statement, however, is Sippel’s conclusion. “Our aim must be to achieve the most unified interpretation of the rules possible, so that we can make predictable appeals to clubs, fans and above all players.” The results of the analyzes will be discussed with the referees before the matches next weekend.

So here we have four situations, described in detail, but providing little or no clarity for the referees. And they are referees with the help of a colleague who is able to review and analyze each situation in slow motion, several times. These full-time trained professionals, on four occasions, failed to reach the correct conclusion, according to the DFB. Yet, apparently, the problem lies in their interpretation, not in the ridiculous handball rule we are all now grappling with. (Just think what it’s like now for us umpires at the amateur level whenever a player gets hit in the arm.)

What can be done? Here is a solution.

2. When a player deliberately prevents a goal in handball (think Luis Suarez in the 2010 World Cup quarter-final between Ghana and Uruguay), a goal is awarded and the player receives a red card. Did the ball go in? When in doubt, we have the technology. Here, VAR could actually play a useful role.

3. The handball law should revert to its previous wording, which was that “deliberate” handball depends on the referee’s interpretation. Remove the “intent” and the abnormally large bodies and all that twisty nonsense from the wording. As evidenced by the Bundesliga and many other examples, this clearly did not help.

There is no perfect answer to the handball riddle, and there never has been. However, when in doubt, simplify. Take handball out of VAR’s area of ​​responsibility (and offside too, unless the margin is really “clear and obvious”, and not the length of a fingernail). Stop micro-analyzing our game and punishing players for infractions that shouldn’t even exist. It’s stifling the joy of football, and it’s a crime.