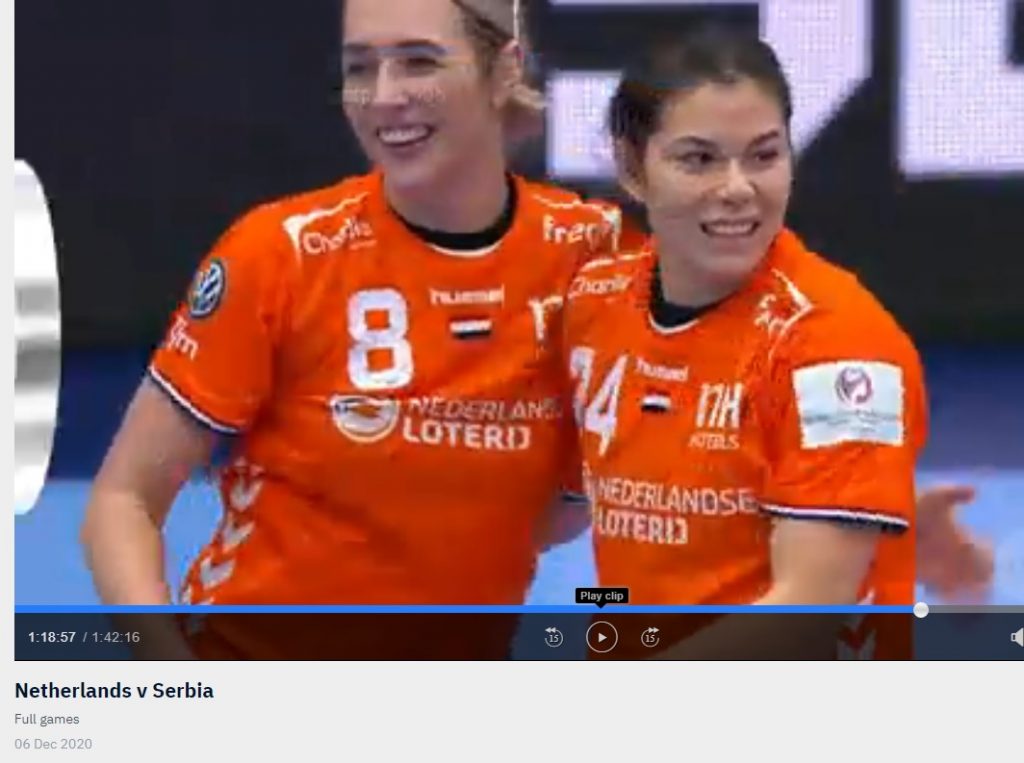 We’ve all seen it… We’ve all thrown things at the TV… We’ve all cursed the stupid coach when another ball is casually tossed into the empty net. The 7v6 strategy is a hopeless strategy and it never works… Except when it does.

Under 6 at half time and out of options

Lost amid Croatia’s incredible run of surprise wins at the 2020 European Women’s Championship was arguably the most remarkable upset of the entire tournament: Serbia came from behind in a 29-25 loss to the Netherlands in the preliminary round.

The match surely didn’t look like an upset for the first 43 minutes of the game. By half-time, the reigning world champions, the Netherlands, had a 15-9 lead and to make matters worse for Serbia, they had lost their star player, Andrea Lekić, to injury. Without any obvious solution, the Serbian coach, Ljubomir Obradovic, decided to change things drastically at half-time, opting to employ the 7v6 offensive strategy. This tactic consists of withdrawing your GK in attack and replacing it by an additional player in attack. This is called 7 on 6 since the offensive set has 7 offensive fielders playing against 6 defensive fielders.

Advantages and disadvantages of 7v6

The only obvious advantage of this strategy is that, in theory, an attacking player is always open and unwatched by the defense. The other less obvious benefit is that the extra circle runner generally forces defenses to hug the 6-yard line more closely, opening up more opportunities for jump shots.

The obvious downside to this strategy is the open net at the other end of the court. If you turn the ball over, chances are the defense will get an easy goal. Same goes if the GK makes a clean save and gets the ball back quickly, or worse, catches it. Perhaps nothing demonstrates this better than this video compilation that (Un)Informed Handball Hour put together to highlight Croatia’s use of strategy against Brazil in the 2019 Men’s World Championship. The six empty-net goals were certainly a big factor in Brazil’s upset 29-26 win.

The first 11 minutes of the 2nd half: decent results, but simply commercial objectives

During the first 11 minutes of the 2nd half, the strategy worked quite well. Serbia have 9 possessions using 7v6 strategy and they score on 5 of them. And, the Netherlands also fail to cash in two empty-net opportunities with GK Tess Wester sniffing out a long shot and Dannick Snelder blocked on a quick shot after a goal scored, by a just-in-time return by the Serbian GK , Jovana Risovic. At minute 38:42 the score is 20-14 and both teams have scored 5 goals each. The Netherlands then receive a 2-minute penalty and Serbia scores 2 goals in 6 against 5, reducing the lead to 20-16.

With the lead reduced to four goals, Serbia seemed to be showing signs of life, but at minute 41:36 everything seemed to fall apart. On consecutive possessions, Serbia passes the ball to the Netherlands for 2 goals in an open net. In less than a minute, the score is 22-16 and the game is back to where it was at the start of the 2nd half, a deficit of 6 goals.

There aren’t too many things more demoralizing to a team than a string of empty goals in quick succession. It’s one thing to allow a goal after playing tough defense for 40 seconds. It’s another thing to see the other team score effortlessly against literally no defence. On more than one occasion, I’ve seen obviously demoralized players hang their heads, or worse, glare with not-so-well-hidden anger at their coach and the stupid 7-on-6 strategy the coach plays them.

We don’t see anything like that, however, from Serbia in the video stream. Instead, we see the Netherlands team with all smiles. The reigning world champions have weathered the storm. They have a 6-goal lead and things seem to be going well for them in their tournament opener.

But, as we all know in handball, “apparently” is often replaced by “reality”. And, the reality that happens in just 6 minutes is a combination of great defense on one end combined with a manual, a masterclass on how to execute 7v6 tactics on the other end. 7 offensive possessions for 7 consecutive goals and a 22-16 deficit turns into a 23-22 lead. One of the goals is on a fast break, but the other 6 are all scored using the 7v6 offensive strategy. And the blows come from everywhere. Wing strikes, breakthroughs, and airborne hits now come from a slightly shorter range due to strategy.

Why if I had better video editing skills I would make a video like the (un)informed handball hour but this time I would replace the dating game theme with the 1812 opener each of the 7 goals being synchronized with cymbal clashes.

Seriously, it’s a fast, relentless beat that’s worth revisiting. For the full effect, start by first watching the Netherlands score their two counter-attacking goals (1:17:15 on the ehfTV clock)

Continuous execution, but at a less efficient pace

The remaining 11 minutes offer the same, but the success rate goes from perfect to pretty good. Serbia only score on 5 of their 8 remaining 7v6 possessions. They also turned the ball around a few times with one of those turnovers leading to an empty goal for the Netherlands. The Serbian defense also allows a few more goals for a final score of 29-25.

Here are some recaps of the 2nd half. First, look at Serbia’s attacking possessions.

Key 1: High Offensive Efficiency: 16 of Serbia’s 26 7v6 possessions resulted in a goal, a success rate of 62%. That’s pretty good and definitely better than the 9-for-28 (32%) pass rate in the first half. I should do more research on Serbia’s average over several matches, but I think it’s safe to say that the 2nd half performance was way above average.

Key 2: GK Preparation: Perhaps, equally if not more important was the preparation of Serbia’s GK after the 7v6 possession. Of the 26 7v6 possessions, their GK was read into the net on 20 of those possessions. And, the Netherlands could only concede goals on just 3 of 6 possessions when GK were late or not in goal at all.

The real key (score instead of turnovers): However, it should be noted that there is a huge correlation between 7v6 offensive success (scoring a goal) and GK preparation. And, of course, there’s a huge correlation with turnovers and GKs not being ready on the other end.

Well, this match is clearly documented proof that the 7v6 strategy can be very, very effective. But is it just an outlier among an overwhelming number of failures like the Brazil-Croatia game? I wish I knew the answer to this question, but I don’t. To varying degrees, I’ve seen this strategy work before. In fact, in 2016 I saw Belgium almost pull off a similar upset against France. At the time, I attributed this to an unprepared French team who didn’t know how to counter this fancy new strategy. Four years later, such an excuse can no longer be valid.

Anecdotally, I can estimate that this strategy fails more often than it works. But, I don’t have the hard data to say how often it works and how often it fails. And, even if I did, it would be hard to read too much because there are so many other factors to consider. In particular, a big part of Serbia’s comeback was their 2nd half defence.

But, here’s an aspect to consider: If we change only 2 Serbia 7v6 possessions from goals to turnovers, it’s probably a 4-goal swing, which means 29-25 becomes 27-27. We always want more goals than turnovers, but with 7v6 the impact of this ratio is even more pronounced. We might even come up with a benchmark ratio for success if they had enough data.

Finally, whatever the numbers might say about the likelihood of 7v6 working for Serbia, the reality is that it worked. And, it was surely more likely that it worked than a conventional strategy would.

Translation: Sorry haters of 7v6: this strategy isn’t going away anytime soon. Not without changing the rules, anyway.