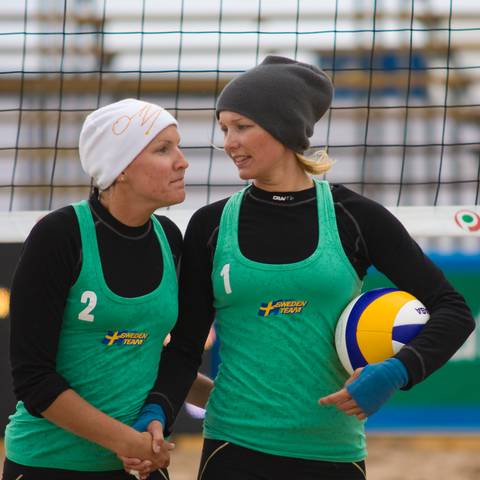 is handball offline? – News from the handball team

In freezing countries like Sweden, it has always been necessary to allow special uniforms on the beach!

I recently wrote about uniforms, although the context then was the headscarf issue. I’ve noticed that our handball rules are surprisingly vague as to what constitutes a true “uniform”. So, among other things, I was asking if we could interpret the rules to allow beach-style bikinis in indoor handball (assuming, of course, they have enough room for player numbers)…

Little did I know we would suddenly have reason to raise the issue of mandatory bikinis for female beach handball players! I had listened to John Ryan’s podcast and talked to some members of our beach handball team in the United States, and was a little amused when I heard that they seemed to have trouble figuring out how to put on their bikini uniforms. And I remember all too well that in the so-called liberal or emancipated Scandinavian countries there were great protests when the IHF made it compulsory for women to wear bikini-style uniforms. They thought it was insulting. But part of the IHF’s “excuse” was that it was simply following the example of beach volleyball.

So I was a little surprised to read a few days ago that beach volleyball decided to no longer make the bikini compulsory. In fact, the obligation really was to wear a swimsuit, so one-piece swimsuits were already authorized for women. But now, not just on a trial basis, but for all official competitions, including the 2012 Olympics, there will be flexibility. It will be allowed to use shorts and a top, with or without sleeves, as an alternative to the swimsuit. In fact, the wording seems to suggest that one could, for example, combine a bikini top with shorts.

This can now raise questions for beach handball: will we be “ahead” of everyone by continuing to insist on the bikini, or will we be “late” in the sense that we force ( in a sport predominantly run by men!) women to wear something they may not like to use? This is of course a question of ethics and equal treatment, and this is the consideration that I personally consider to be the most relevant. But I’m sure other observers will say more cynically that the public relations aspects and the ability to attract spectators and sponsors should not be neglected. Indeed, some media commentary about the beach volleyball decision is already suggesting that “this inherently boring sport will lose its glamor and ability to attract attention if the swimsuits don’t part of the show on the beach. ”.

It will be interesting to see if the decision in beach volleyball provokes a reaction within the IHF, and I would also be curious to know how current and potential beach handball players and spectators view it! Do you want handball to follow the example of volleyball?