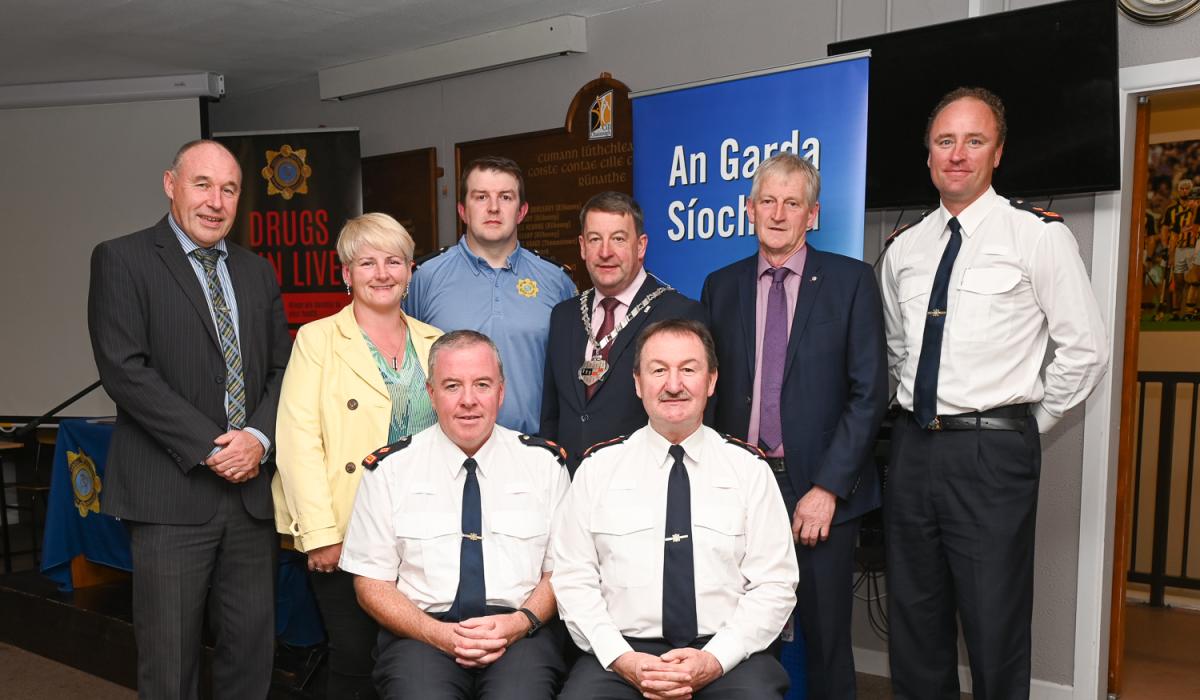 Kilkenny GAA and gardaí team up to tackle drug use

Bullying by organized criminals and the collateral damage associated with drug use is being tackled in a new awareness initiative by the gardaí and the GAA.

Crime Prevention Officer Sergeant Peter McConnon said the initiative had already been successfully rolled out in Carlow and a number of GAA clubs in Kilkenny had contacted him with a desire to do something similar and that the gardaí had encountered the Cathaoirleach of County Kilkenny. Council and Chairman of the Joint Policing Committee, Cllr Pat Fitzpatrick.

“The aim is to raise awareness about drugs and educate people about the pitfalls that can get out of control to the point where there is no way back. If we can save one person from a club every year, this initiative has been a huge success.

“The simple message is that drugs ruin lives,” he added.

Cathaoirleach Pat Fitzpatrick congratulated GAA for participating in the initiative.

“What better organization to do this than the GAA, which is in every parish. As Cathaoirleach of Kilkenny County Council, I am delighted to be working with An Garda Síochana and the GAA on this initiative. just the start of this process and I would like to thank Jimmy Walsh and Kilkenny GAA for partnering with this initiative,” he said.

Kilkenny GAA Chairman Jimmy Walsh spoke about the heartbreaking impact of drug use in communities in Kilkenny.

“I have stood in cemeteries of overdose cases. I found myself twice in a few months in a cemetery because of drug-related suicides.

“I heard stories of threats or warnings of beatings. I know families who have received threats to set fire to their property and physical violence.

“The worst thing is the advantages gained in lifestyle and property by the benefactors who ruin the lives of our young people.

Mr Walsh told representatives in attendance that “by supporting each other, we have a real chance to improve everyone’s lives”.

“We are here to learn how to play a part in the fight against the evil of drugs. The pressures are there on everyone and not just young people,” he said, adding that he had seen “generations of families destroyed” by drugs.

“I hope to see this initiative rolled out to clubs in Kilkenny and we fully support it,” he added.

Chief Superintendent Padraig Dunne said the initiative depends on the goodwill of the community.

“We need the help of the community and the GAA clubs. It’s about prevention. Drugs ruin the lives of users and their families. I want the help of all the GAA clubs to raise awareness and help keep people away from drugs and if they are on drugs to get them off,” he said.

“We’re asking the reps here to go back to their clubs and see if they want to invite us over there to talk to the members.”

Inspector James O’Brien, who was head of Kilkenny’s drugs unit, said the gardaí were “trying to start a conversation and educate people about the dangers of drugs” and “looking for membership of the GAA”.
The inspector spoke of drug-related bullying he had encountered in Kilkenny.

“There was the case of a man in his twenties who had no previous convictions and who was unknown to the gardaí. Within five months he started using cocaine at the weekends and five months later he owed €70,000 to a Dublin-based gang.

The gang targeted the man’s family members and demanded they pay the debt and they were the target of arson.
A massive custody operation has been set up and a well-known criminal has been arrested.
Inspector O’Brien said that following the involvement of the gardaí, the intimidation stopped. He also spoke of a second case that Kilkenny gardaí investigated, centering on a young man being punished and his mother paying criminals over €5,000.
“Gardaí managed to recover most of the month and made two arrests and all intimidation stopped. The message is that if you have a problem, contact the gardaí.