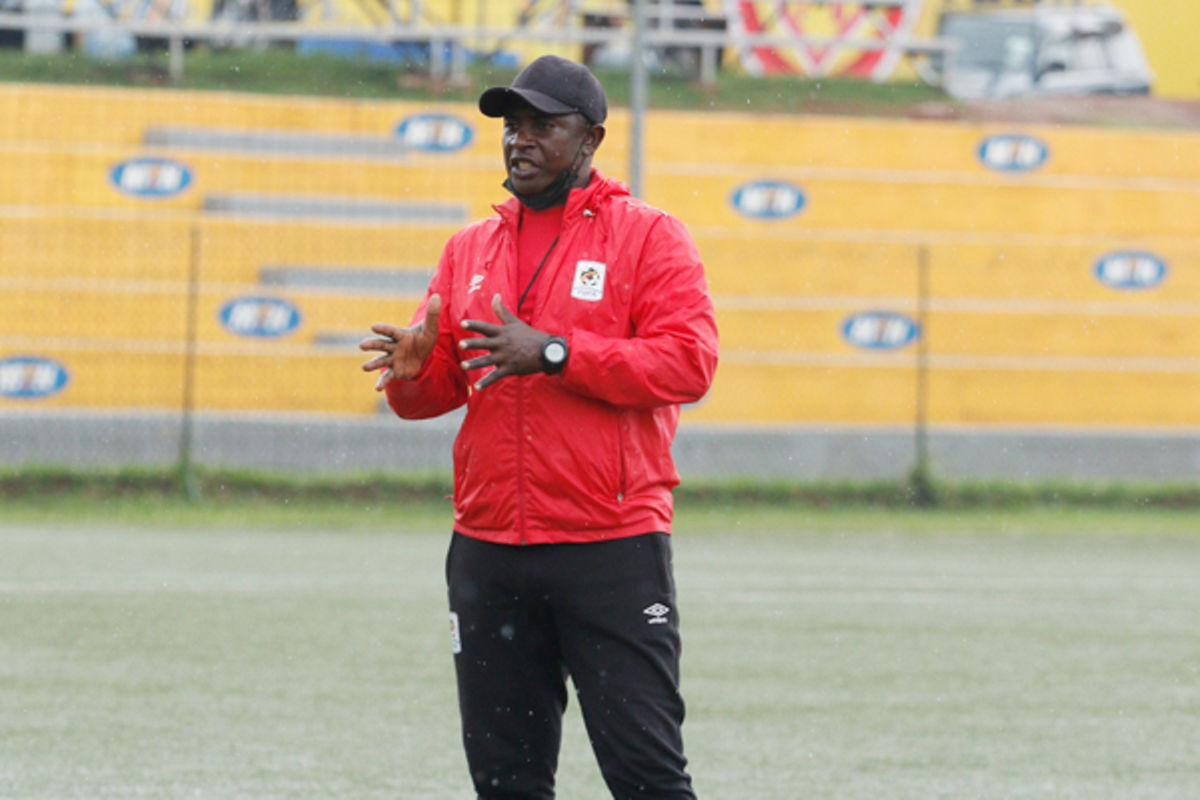 George Lutalo is the head coach of the senior women’s national team, the Crested Cranes. Last week, he became the first coach to win the Cecafa Senior Women’s Championship for crested cranes since its inception.

Earlier this year in January, he helped the team qualify for the Women’s Africa Cup of Nations, commonly known as AWCON, after 22 years.

Born to Margret Namukasa and the late Amos Musisi Sserunkuuma in 1976, Lutalo grew up with his grandmother, the late Rose Nanyunja kazigo as his mother left them to seek money. No one introduced him to football but instead found himself playing football on the streets of Masajja, Busaabala Road, a suburb of the city on the Entebbe-Kampala highway. When he joined Nakivubo Primary School, his dream of playing football came closer as he could easily escape to go to Nakivubo as well as Lugogo and watch the legends of that era. These KCCA legends included Philip Omondi, John Latigo, Issa Ssekatawa were his inspiration when he started playing football.

Sometimes he called himself the names of these players and could imitate everything they did. He would wake up in the morning and decide to play like Ssekatawa and that day he would become a striker or a defender if he decided to emulate John Latigo.

The drain pipes around Nakivubo Stadium became Lutalo’s lanes he used to enter. At that time, Lutalo was a third-grade student but had never had the chance to play football in school, so escaping was the only way he could use.

He would then practice the skills he had adopted from Nakivubo and Lugogo once back in Masajja on a community ‘Kataka’ field. While life has come full circle, Lutalo still lives near this ground.

In a normal setting and during his time, classes had to end either at 1 or 4 p.m., but Lutalo’s classes ended at 10 a.m. and could spend the rest of the time in Nakivubo or Lugogo. His love for the game made him escape from school on a daily basis.

For him, studies were less important compared to football as his only 32-page book always served as a goal with a dirty stone placed on top. Sometimes the bullet would hit her and the pages would tear. By the end of the matches, the book had 10 pages. The cover had visibly disappeared.

His actions earned him several punishments but he hasn’t stopped yet as he was always prepared and used to punishments. It wasn’t until his fourth year of primary school, a class he repeated twice, that he decided to pay special attention to his studies.

After successfully completing primary level, Lutalo went to St. Joseph’s Secondary School in Kyankwazi (the one owned by the late Cardinal Emmanuel Kiwanuka Nsubuga) before joining Nsambya. Football was always in his blood and in no time he received the armband of the school football team.

It was from this location that former Fufa President John Baptist Ssemanobe spotted him during a friendly match with Kyankwazi Leadership Institute staff and took him to Nsambya. For Lutalo, it was a big breakthrough as he approached the Ugandan top flight, the Super League at the time and he was also made captain. It wasn’t long before the late Denis Obua, a great Uganda Cranes coach and then Fufa president, identified his talent and recruited him for the police as Nsambya was relegated to the regional league. It was from the police that Lutalo started playing competitive football.

Even as a youngster, Lutalo always showed leadership on and off the pitch and in all the teams he played for he was always the captain. Obua made him captain for life while in the police.

At the time he joined the police team, Lutalo was still studying at St. Balikuddembe to obtain a certificate in carpentry. Lutalo played football and handball at St. Balikuddembe. This continued until he retired from football in 2004. Balancing the two is something that never gave him a headache. In handball, he used to fly through the air, a skill he used while defending at Police despite his height. As small as he was, Lutalo could run as many times as he could on the handball court. Such exercises contributed to his fitness whenever he could walk on a football field. The police also gave him a license to play for their handball team, but he turned it down due to the many responsibilities he had as club captain.

Lutalo’s playing career was short-lived and then-police coach Paul Hasule named him to his technical squad, which he initially never welcomed.

In 2004, Lutalo put an end to his playing career to become a coach at Police under Hasule, a decision he says was very difficult to make. It was Hasule who told the management that Lutalo should stop playing football and join his technical team on the grounds that he was getting old. He became an assistant coach despite the dissatisfaction.

Lutalo’s journey with Hasule was short-lived as the latter died a year after Lutalo took on the role of assistant coach. Today, the only regret still deeply etched in Lutalo’s mind is the fact that his mentor in training, Hasule, could not witness his success. During this short time together, he learned a lot of things that still form the basis of his coaching career.

After Hasule’s death, Lutalo worked with Asuman Lubowa and in 2005 they guided the club to their only league title before leaving the club to join Bunnamwaya, the current Vipers SC. At the time he and Charles Ayeko joined the club, he was battling relegation after posting a poor showing in the first round of the season. They then helped the club avoid relegation.

After leaving Bunnamwaya, Lutalo never settled into a club changing clubs almost every year. In 2007, he joined Edgars Soccer Academy and worked there for seven years as head coach until 2014. The Boroboro Tigers of Lira, then playing at the highest level, came calling at the same time . As a nomadic coach, he has also coached Masaka LC, Sadolin, St. Juliana High School and Water.

Notable players he has taught include current URA captain Shafiq Kagimu and Patrick Mbowa. They moved from the regional league to the national team.

In 2016, Lutalo was appointed head coach of Gomba ahead of the Masaza tournament. At the time of his arrival, Masaza’s record champions had gone almost four years without reaching the final. He guided them to the final and finished second, losing to Buddu on penalties.

Soana, now Tooro United, came too, as did Nakaseke International School. He guided the school to post primary qualification for the first time and took it to the East African Secondary School Games.

Lutalo, like many coaches, believes in patience and trust in order to build a great team that can compete over the years. However, he identified the lack of trust and patience among club administrators as the biggest challenge in his coaching career dating back to 2004. Many administrators asked him for results but never wanted to get involved in the reconstruction phase which saw him move from club to club. time.

Lutalo always felt that his efforts were not properly valued which cost him good players. While he explored them, the players never stayed with him long enough to develop.

After touring almost every competition, Lutalo returned to the Startimes Uganda Premier League as assistant coach to Sam Simbwa until 2021 when he got a call from fufa to take on the role of head coach of Crested Cranes replacing Faridah Bulega.

Lutalo saw adapting to women’s football as a bigger challenge, but was optimistic about handling the girls. Understanding, trust, hard work and caring for each girl’s problems is one of the key things that has helped him to achieve good results so far.

A new face in women’s football, Lutalo’s first task was the Cosafa Championship in South Africa.

Even though he failed to make it out of the group stages, the championship gave him a clear picture of where he could start from.

In just one year as head coach, Lutalo managed to secure the Women’s Africa Cup of Nations berth for the side she last played for in 2000, 22 years ago in South Africa.

At the final whistle in Njeru, he said in his head “incredible”. Since embarking on his coaching career, Lutalo said winning the Cecafa Senior Women’s Championship title was the biggest achievement.

Uganda enjoyed an impressive campaign scoring a total of 15 goals, conceding only once. Lutalo says Cecafa has prepared him well now as he knows where his strengths and weaknesses lie. For many, Cecafa’s squads would be considered small but for him it was a big challenge which prepared him for the upcoming Women’s Africa Cup of Nations.

With the Cecafa task accomplished, the next target now is to deliver another incredible performance in Morocco as they look to finish in the top four teams to secure the World Cup spot. However, with hard work and solidarity in his camp, he believes it is something they can achieve as well.

Despite all these accomplishments, Lutalo believes there is still a long way to go before the crested cranes have a team that can compete for quite a while. For him, patience, trust and hard work are the only ways crested cranes can fly high in the years to come.