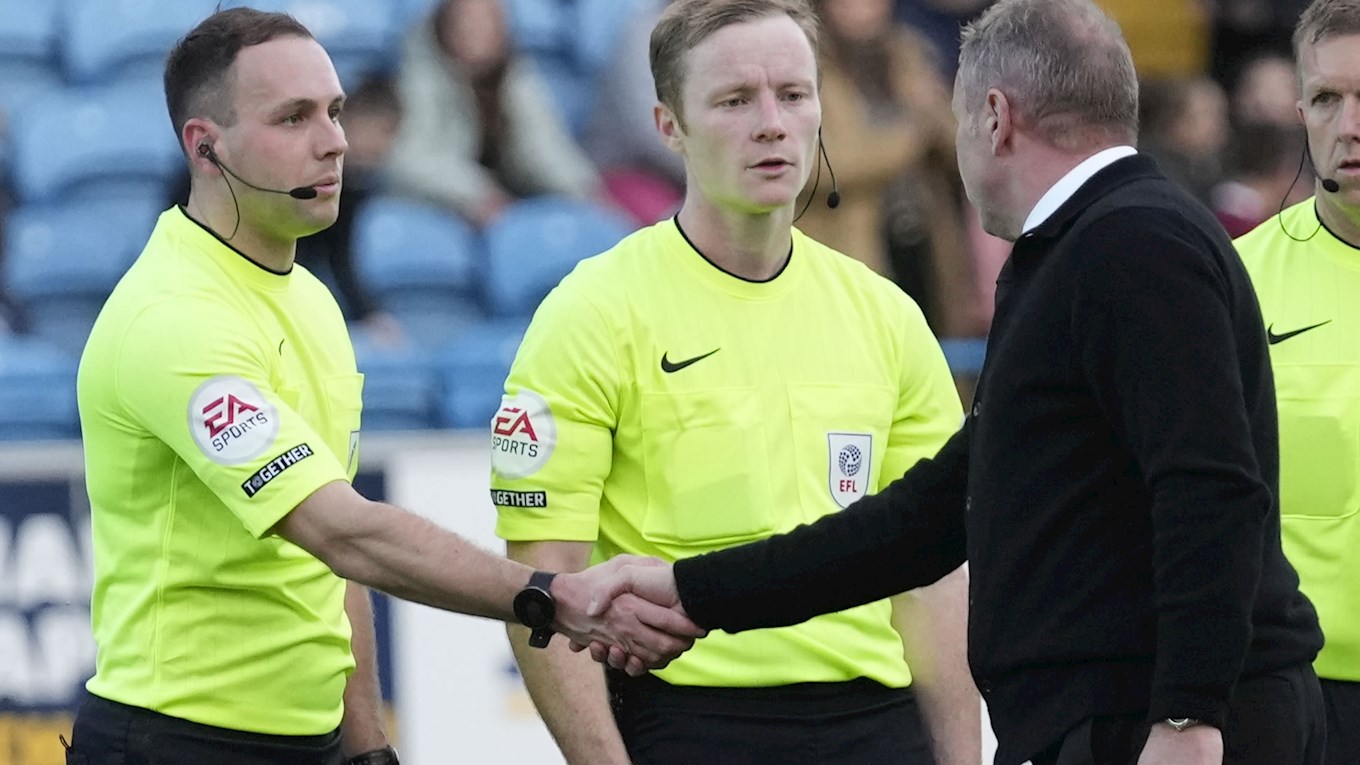 MANAGER: I know how difficult it is – News


Clubs, managers, players, fans – everyone – are guilty of viewing every game through the color of their particular team’s tinted glasses, and there’s always, always an understanding of how difficult it is for officials to make every decision correctly, especially in the pressure cooker environment of a professional game, where there is so much constantly at stake.

But sometimes it’s right to feel aggrieved, and you have to talk about it afterwards, like we did with manager Paul Simpson on Saturday afternoon.

The big moment number one was a handball, a very clear handball, it was not given. But not only were the hosts denied their kick, the aftermath led to a boiling point and red card which reduced the Blues to ten men.

“I saw it again and at the time I thought it was a handball,” the gaffer told us. “The players, most of the spectators and all of us, used handball.

“Looking at that it seems like a very easy decision to make, I have to be honest about that. The distance between the incoming shot, the fact that the player’s arm is not at his side, so he’s in a unnatural position and he hits his arm.

“The referee, give him his due, is in a good position and that’s probably the only positive thing I can say about him since the game. How he doesn’t give it, I don’t know.

“He tried to explain it to me when I walked in with the assessor, and so far I feel he’s wrong. It should have been a penalty, it wasn’t given, and unfortunately as soon as the next corner Ryan got some blood and I don’t know if it’s a slap or a push on Pratley, but he deserved to be red carded for it.

“We’ve been really good in terms of discipline this season, really good, and I’ve been delighted with the way we’ve approached that aspect of things,” he added. “I don’t even know what caused it, there was a little rapprochement with Pratley, but I’ll have to look closer to see what happened.

“It seemed a bit of a stretch to do what he did, but I’m not defending Ryan, he deserved to be kicked out. Once you put your hands up, whether it was a slap, a punch or whatever whatever you do, the referee must make that decision.

“It’s a blood rush he has to learn from. He worked so hard to come back and he will now be out for three games, in the two really big games coming up this week. We’re already in a situation where there are fewer of us in forward areas anyway, so that’s even more frustrating.

“I’ve already spoken to him about it. I think I have nothing more to say to him. It will be processed because it is unacceptable. We’ve had incredible discipline, as a group so far this season our discipline has been top class.

“We’re going to have to stick together now, we’ll have to take care of Ryan, it’s a huge learning experience, remember he’s still a young man.

“He’s worked hard, unfortunately he’s got a three-game suspension now and he’s going to have to work extremely hard during that to be ready when we need him back.”

After dealing with handball and sending off, there was the huge ‘second phase’ offside rule which apparently came into play as Orient scored their third goal with the convinced United contingent the flag was about to go up.

“I think it was another very easy decision to make,” he insisted. “I think it’s a blatant offside, and I understand the rule has changed so it has to be a deliberate pass for it to become a second phase.

“How, when Corey stretches to try to intercept the ball, and in my opinion, he completely misses the ball. That means it’s not a pass but again the referee and his assistant on the main stand side said that through their communications the fourth referee said there was a pass. definitive touch of blue.

“Well, he was standing next to me and I could see there wasn’t. It wasn’t a touch or a controlled pass, it wasn’t deliberate and I just think they’re easy decisions.

“There were a lot of things in the game where I felt the referee completely lost control and in my opinion I didn’t think he was able to control this game. It’s really disappointing.

“I will also say that I know how difficult it is for the referees, I totally understand that. But when you have easy decisions like offside and handball, as simple as the decision on the red card was, then they must be given correctly.

“Jordan Gibson is a yellow, Jayden’s late tackle is a yellow, no problem with that, but the two big calls he made against us were just wrong.

“One leads to a red card after not getting a penalty and the other leads to a third goal which makes the game even more out of our reach. I think those are huge calls and huge errors.

“I repeat that I totally understand that this is a really difficult job. I understand that. But there are four who can’t find the right outcome on key decisions. We have to do it right.

“I don’t believe we should be running up and down the touchline to berate referees and assistants, I don’t think we need to. But it’s incredibly frustrating when results are determined sometimes. by manifestly erroneous decisions.

“The referee is not the only reason we lose, so let’s not start getting into that. We cost ourselves with not-so-smart decisions on our part.

“Let’s think about all the good things, focus on where we caused them problems, the energy we showed and dust ourselves off and prepare for another big challenge on Tuesday.

To watch the video, please enable “targeting” in cookie settings