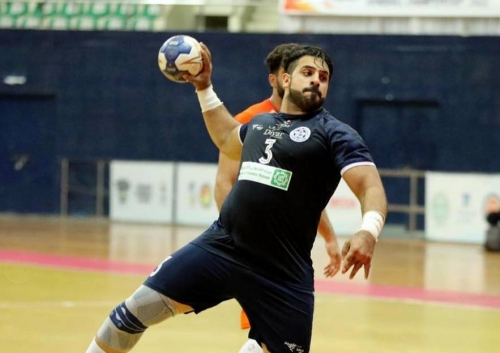 Bahrain champions Al Najma got off to a winning start yesterday in their gold medal bid at the 24th Asian Men’s Club League Handball Championship, beating Mes Kerman of Iran 31-25 at the GMC Balayogi Indoor Stadium in Hyderabad , in India.

This was their first game in Group B of the first round of the competition, where they will also face Al Kuwait of Kuwait and Al Wakra of Qatar. The Bahrainis enjoyed a 14-10 lead at the end of the first half and maintained their strong performance in the final 30 minutes.

In yesterday’s other Group B match, Kuwait outscored Wakra 33-22. In Group A, Kuwait’s Al Qadsia beat hosts T-Sports India 37-24 while Qatar’s Al Arabi beat Saudi Arabia’s Al Noor 29-24. Both games were played on Wednesday evening on the first day of the tournament.

Mohammed Habib Naser and Oliver Nyokas scored two each, while Mohammed Mirza, Bakary Diallo, Komail Mahfoodh and Hasan Al Fardan finished with one each. Najma goalkeeper Mohammed Abdulhussain made eight saves in the game while Hamad Shamlan made four.

The Asian Club League Championship is set to continue until June 30. Najma will return to the pitch tomorrow when they face Kuwait and then play their final group game against Wakra on Monday.

The top two teams from both groups will advance to the semi-finals on June 29, while the next two will play the consolation round for their final standings. The final placement matches as well as the bronze and gold medal matches are scheduled to be played on June 30.

Najma won the tournament title once in the past, in the 2017 edition which was also held in Hyderabad. They also won silver medals in 2015 and bronze in 2001. In the previous edition of the competition last year, Najma placed fourth after losing in the bronze medal match against Arabi by one goal.

As well as being an Asian championship, the competition also serves as a qualifying event for the International Handball Federation (IHF) Men’s Super Globe. Only the champions will book a ticket for the event, which is contested between the champion clubs of the continental confederations. Najma has only competed once in the 2018 edition. This year’s Men’s Super Globe is scheduled for October in Saudi Arabia.

2022-06-24
Previous Post: Reviews | Why conversational AI is the future of fan activations
Next Post: The transfer of a squash player to England shows the exodus of Egyptian athletes