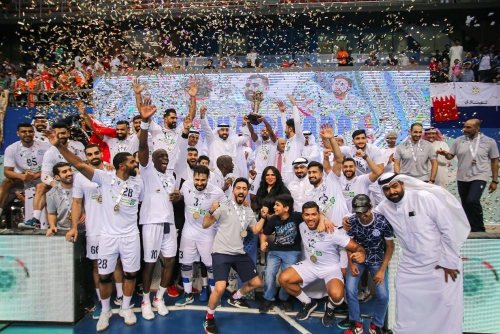 Najma dominated the contest and led by no less than 15 goals in the second half. After the gold medal match, Najma received the champions trophy and their respective medals in a ceremony attended by Bahrain Handball Association President Ali Issa.

With the result, the national champions added another feather to their cap with the Gulf crown. They have now won the coveted Club Championship six times. Their triumph ended a two-decade title drought, with their previous victories having come in 2001, 1998, 1990, 1985 and 1984.

Najma had also won the competition’s silver medals three times in 2006, 2004 and 1999; while winning bronze twice in 2003 and 1982. Mahdi Saad finished top scorer for Bahrainis with seven goals from eight attempts.

Control After a 2-2 start, Najma went on to go 8-3 to take control of the game. They continued to hold a comfortable advantage before halftime and headed for the locker room 18-12. In the second 30-minute period, the Bahrainis were dominant and never wavered.

A Saad goal from a counterattack just seven minutes after the restart gave them their first double-digit lead, 24-14. They then continued to widen the gap in the final quarter of an hour and four successive goals from Basham, Saad, Mahfoudh and Nasser made it 15, 36-21 for the first time.

Najma went the rest of the way and Mahfoudh drove the nail in the coffin with a goal just before the final buzzer. Bahrain national team star Mohammed Habib used to play for Mudhar. He finished with four goals.

Hassan Aljanaby was their top scorer with seven goals. With the Gulf Clubs title in the bag, Najma is now aiming for the 24th Asian Men’s Club League Championship, which will take place in Hyderabad, India from June 22-30.