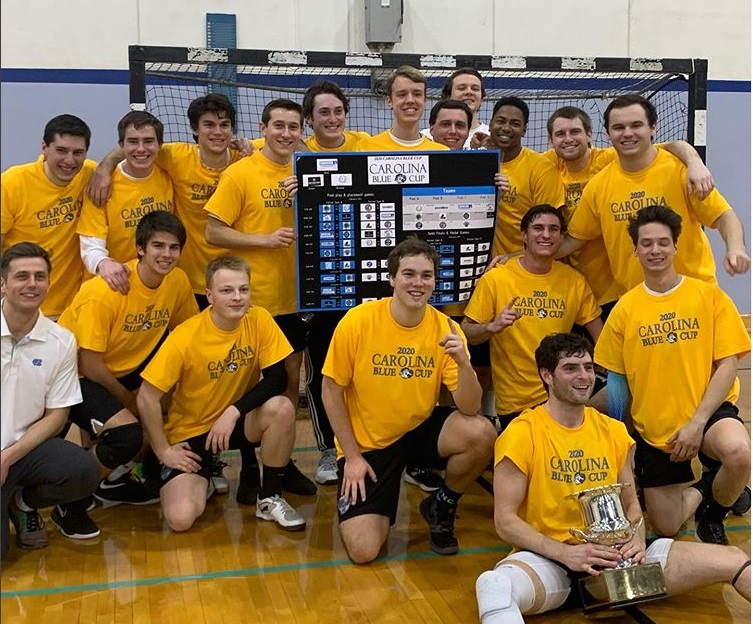 North Carolina hosted 11 teams last weekend in their annual Carolina Blue Cup tournament and they ended up winning the title. Here is a summary of the results with a focus on the 4 collegiate clubs (North Carolina, Army, Virginia and James Madison) that participated.

The 11 clubs were divided into 3 pools of 3 teams and 1 pool of 2 teams. Each group played a full round robin and here are the results.

Virginia 31 – James Madison 24
In the 9th-11th place consolation game, Virginia got revenge for a loss to JMU two weeks ago in the Northeast Team Handball League (NTHL). JMU was actually leading 12-11 at halftime, meaning Virginia totally dominated the 2nd half for the eventual 31-24 win. Virginia was trailed by Lincoln Ambrose and Ben Kilpatrick with 10 goals each. James Madison’s Nick Federovitch, Tom Fonti and Kevin Plunkett scored 4 points each. Both teams also eliminated Philly in consolation play.

In one of the biggest upsets in American club history, Army shocked perennial contender for the US Open Championships NYAC to a 35-34 win. For some context on the upheaval: NYAC’s roster included at least 9 former national team players and 2 Olympians while the Army roster had no player with more than 3 years of club experience. Army was led by Ryan Thistlewood with 10 goals. Nathan Chilian and William Considine added 9 and 7 goals respectively. In the other semi, North Carolina easily beat Saskatchewan 34-24. Leandro Pappalettera led Carolina with 8 goals and Aaron Hamm added 7.

It was a collegiate affair for the tournament title and North Carolina prevailed 31-29. North Carolina was led by Leandro Pappalettera with 11 goals. Alex Laws scored 6 and Aaron Hamm added 5. Army trailed William Considine with 9 goals and Nathan Chilian added 6.

Remarks
– I have been informed by several tournament participants that the participating army team, West Point Gold (2nd team army) has been supplemented by players who played for West Point Black (1st team army) ‘army). And that it was a team made up entirely of underclassmen (no seniors). So maybe this “combined team” could be considered better than the 2nd Army team, but not quite as good as the 1st Army team.
– North Carolina’s Leandro Pappalettera is a graduate exchange student from Argentina, and as you might have guessed from his goalscoring, he’s an experienced player. However, unfortunately for North Carolina, they will soon lose that extra punch as he returns to Argentina and will not compete in the College Nationals.