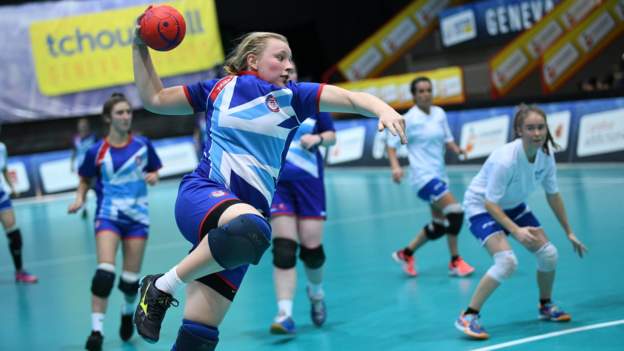 Tchoukball: the British team prepares for the challenge of the European championship

The British team are aiming for the podium at this year’s European Tchoukball Championships.

This sport, created by a Swiss biologist in the 1970s, is practiced all over the world and is particularly popular in Asia.

“It’s unique – there’s no other sport like it,” Liam Green, coach of the British team and Portsmouth Tchoukball Club, told BBC South Today.

“We say it’s the fastest handball sport in the world.”

Six countries will take part in the European Championships (ETC) which will be held at Leeds Beckett University in West Yorkshire from August 4-6.

The UK squad send five teams to the ETC, A and B teams for the men’s and women’s competitions, plus an under-18 team, and 11 of the 41 players selected play for Portsmouth-based clubs.

“It’s a really good hub here at Portsmouth,” says Elle Jones, who plays the Women’s A team striker for the UK and Portsmouth squad.

“We also have nearby clubs in Fareham and Guildford which are ideal for community and mixed training.”

“When I describe the sport to new faces, I just say look it up online because they are often confused when I explain it. As soon as they watch a clip, they are amazed at the speed and intensity .”

“We have to finish in the top four”

A game of Tchoukball involves two teams of seven players, who score points by throwing a ball against a high-spring trampoline and trying to force turnovers – there are no tackles or interceptions.

Italy are the reigning European men’s and women’s champions – the UK last won the title in 2006.

“Italy are the biggest hitters in Europe,” coach Green said.

“Our goal is to win as many matches as possible and try to earn some silverware. But this tournament is also about preparing for the World Tchoukball Championships (WTC) next year.”

He added: “We have to finish in the top four of the European Championships to get automatic qualification.”

At the last WTC in Malaysia in 2019, the men’s team of the British team – ranked 10th in the world – finished eighth and the women finished their tournament in sixth place, tied with their ranking.

“We didn’t do too badly at the WTC in Malaysia,” said Charlie Reulieaux-Widart, who plays defense for the British men’s B team and Portsmouth.

“Given the strength of the teams in Asia and the quality of their setup, we did well. UK are definitely on the map, looking to improve and challenge for medals.”

You can watch the European Tchoukball Championships matches at Leeds Beckett University next month for free or follow the action live via the Tchoukball UK website.