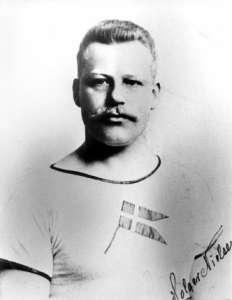 Yesterday, Stefan Fatsis, arguably the biggest proponent of team handball in the American “mainstream” sports media, spoke briefly about the origins of handball on the Slate, Hang up and listen podcast: Link (Towards the end, at minute 1:02)

The source of her “after prom” was an article, “The three-time Olympic medalist who invented handball and the precursor to CPR», writes in the Copenhagen Post: Link

As someone who follows the sport quite closely, this is probably the best article in English I’ve ever read on the history of the origins of handball. To be clear, Holger Nielsen isn’t quite the equivalent of James Naismith, as Naismith invented basketball virtually from scratch, but he clearly deserves a lot of credit for codifying the rules and promoting the game. in the early 1900s.

Perhaps handball would still have become the sport it is today without Holger Nielsen. And, maybe not. Either way, it looks like he’s someone who should be a little more well-known in handball circles. A place in the Handball Hall of Fame (if there is one) and an award or trophy bearing his name. Like the IHF World Player of the Year, could be the Holger Nielsen World Player of the Year the same way the best college basketball player wins the Naismith Trophy.

As I have learned over the years, handball has a rich history. One that should be celebrated more.