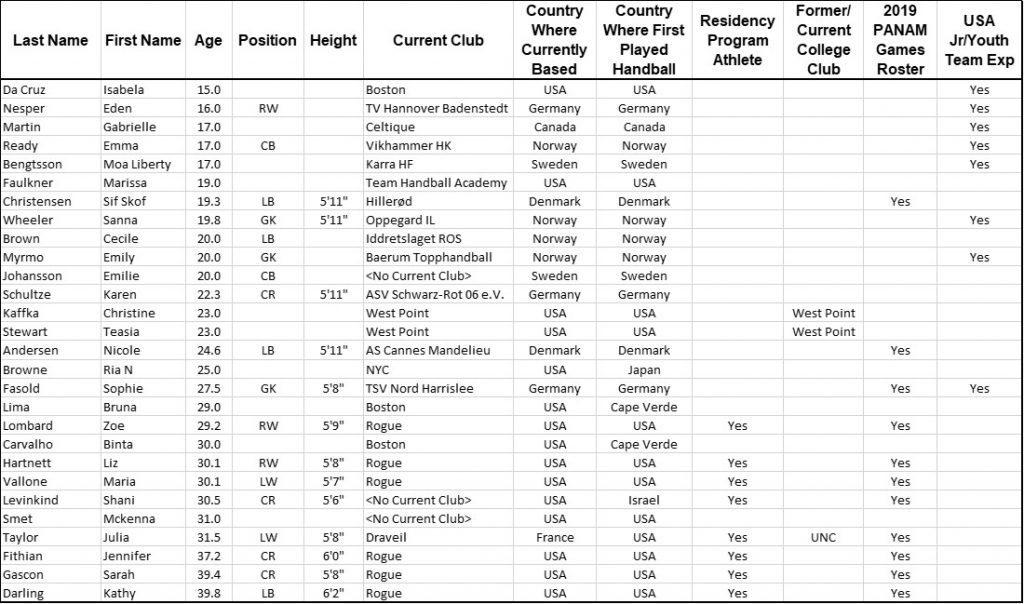 Last Wednesday, USA Team Handball released a preliminary roster for this summer’s North American and Caribbean Handball Championship. The list features 28 athletes and here is a breakdown by age and where they first learned to play handball.

The ages on the list range from 15 to 39 with an average age of 25.1. That’s quite the range and is considerably more spread out than the typical Women’s National Team roster which is more clumped together with the bulk of athletes in their twenties. For comparison, take a look at the rosters of the 24 nations at the 2019 IHF Women’s Handball World Championship

All of these athletes are Americans, but the United States is a large nation with a global population. Estimates vary, but as many as 9 million US citizens live in another country, so it’s hardly surprising that some of those 9 million learned to play handball where they grew up. In fact, 57% (16 of 28) of the US roster originally played handball in 8 different countries. Norway leads with 4 athletes followed by Germany with 3. Other nations: Cape Verde (2), Denmark (2), Sweden (2), Canada (1), Israel (1), Japan (1) .

The fact that the United States has so many athletes with dual citizenship is sometimes considered controversial, but it shouldn’t be. I have addressed this reality and its implications for the US National Team and the development of the sport previously in a commentary series (Part 1, Part 2, Part 3)

Of the 12 American athletes who were raised in the United States, 3 athletes (Kaffka, Stewart and Taylor) are products of collegiate clubs, 6 athletes (Lombard, Hartnett, Vallone, Fithian, Gascon and Darling) have d first learned to play in a Residence Program (Cortland or Auburn University) and 3 athletes learned handball alone or with a club (Da Cruz, Faulkner and Smet).

My projection for the final list is a mixture of logic and guesswork. The logical part is mainly to look at the list of the last major tournaments (the 2019 PANAM Games) and write in pencil any name from this list that is also on the preliminary list. Of course, just because someone was on the team the last time doesn’t mean they’ll be back on the team, but it’s usually a good place to start. The COVID-19 pandemic further reinforces this logic, as it has somewhat frozen things in place since March 2020, with many athletes not even playing handball much since then. There are 11 potential returns and assuming 16 athletes will be allowed for this tournament, that means 5 newcomers.

And this is where some major guesses are needed because I don’t know many other names on the list and I don’t even know what positions some of them play. So, with that in mind, here’s a high-level assessment of the athletes who could make the final roster. To be clear, though, I’m not going to make any concrete projections other than that I believe all 11 PANAM Games athletes will make the final roster. I just don’t know enough about newcomers.

Guardians: Sophie Fasold was one of the 2 goalkeepers on the PANAM Games list and the other GK, Bryana Newbern is not on the preliminary list of 28 players. Fasold was also able to play a full season with her club team, Nord Harrislee in the German 2nd division, so I think she will probably get most of the minutes. The coaching staff will have to choose if they want 2 or 3 goaltenders on the roster and Sanna Wheeler and Emily Mrymo have already made junior team rosters. McKenna Smet is also identified as GK who is very new to handball.

Left wing: Julia Taylor was the 3rd top scorer for the United States at the PANAM Games and Maria Vallone was her backup. It would seem that these two points are quite locked, but I don’t know the other potential options.

Right wing: Zoe Lombard and Elisabeth Hartnett were the participants in the American PANAM Games, but they could be joined by 16-year-old Eden Nesper, who played for the US Youth team in 2019 and plays for both the U17s and U19s for his club team, Hannover Badenstedt in Germany. . The Hannover U17 team won the German Cup title last weekend. She’s a capable player with a bright future, but it’s still a pretty young age to play against adults. It will be interesting to see what the coaching staff decides.

circle runner: Veterans Sarah Gascon and Jennifer Fithian are both expected to make the roster and will be joined by Shani Levinkind. Levinkind was selected to the PANAM Games roster, but did not compete due to injury. Karen Schultze, 20, plays in Germany and had already been added to the squad, so it’s safe to assume she’s also a strong candidate. This position may seem settled, but since there are major question marks in the backcourt, some of these players could end up playing there instead of at the circle.

Back zone (left, center, right): While the other positions seem to be somewhat settled, there are a lot of question marks as to who will play the three backcourt positions. Well, not all question marks. Left-back Nicole Andersen, the USA’s 2nd-leading scorer at the PANAM Games, returns and will likely be called upon to take on a bigger leadership role with the team. Veterans Kathy Darling and newcomer Sif Skov Christensen are also back. And… that’s it (as far as I know) when it comes to getting players back on the pitch.

Logically, this means that some newcomers are likely to play very important minutes at key backcourt positions. And, really not knowing these players, that means some major guesswork. I’ve heard good things about Emma Ready and even played her dad a few times a long time ago in California, so maybe she inherited some of her fiery speed. Although she’s only 17, she could be an option at Center Back. Cecile Brown and Emilie Johansson are also possibilities and as dual citizens they may have had quite a bit of playing time despite their relatively young ages.

But, really for all I know, several names on the list that I haven’t even mentioned (see below) might just be the athletes the selection team is going with.

But here’s one thing I do know: America’s success or failure in Elgin this summer will likely depend on these newcomers and their ability to make a meaningful contribution in the backcourt.

Much of the comments above have focused on players likely to return from the 2019 PANAM Games and some new gaps that newcomers will need to step up to. So, for context, I’ll highlight some players who weren’t on the preliminary roster and the contributions we’ll miss.

First of all, central defender Jence Rhoads, the top American scorer (24 goals in 5 matches) in the PANAM Games is not on the list. Anyone who has seen USA play in the last few years knows that she developed strong skills and was the playmaker directing traffic on offense, making the players around her more productive. Also, left-back Julia Sayer and right-back Ashley Butler are not returning. In total, these 3 athletes accounted for 44% (40 of 91 goals in 5 matches) of the live goals scored at the PANAM Games. In terms of backcourt productivity, they accounted for 74% (40 of 54 goals) of backcourt scoring. The news that right-back Karoline Borg’s long-awaited return will be delayed due to pregnancy further limits the options experienced. Borg, 30, plays right-back for Aker Topphåndball in Norway’s top and league and had previously played for the United States

While these roster changes will impact the United States, it’s more than likely that the United States won’t be alone with this problem, as other NACHC countries are also likely experiencing similar churn. Such change is inevitable and it will be interesting to see how well teams are doing in integrating their newcomers and preparing their teams after a long pandemic layoff.

Note: If any information in this table is incorrect, message me at john.ryan@teamhandballnews.com and I will update it.