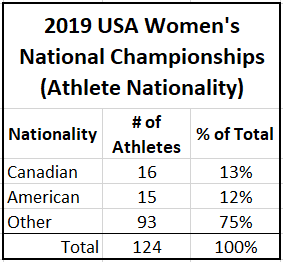 This article is part of a series, Charting a Way Forward for USA Team Handball (2019 Reboot)

A brief rant on women’s sports in the United States

The rest of the world has seen it with our women’s soccer program. While American men might be respectable (even if we failed to qualify for the last World Cup), American women are steamrollers. It’s kind of amazing when you think about it. When I was a child, football was a secondary sport for boys and girls. Little organization, few youth programs and nobody cared. Now it is played coast to coast by millions of children. And, therefore… we have a respectable men’s national team and a fierce women’s team. Yes, overnight the United States had more girls and women than any other country.

And that even includes European countries. Since the United States is populated by a significant number of European descendants, it is sometimes common for Europeans and Americans to think that the United States looks pretty much like Europe, except for this puritanical aspect. and, in some cases, a different language. This is often correct, but not always. Example: Check out this story from NPR about women’s soccer in France and the cultural struggle they had to overcome regarding how soccer is for boys, not girls. And that if you’re a girl who plays, you must be a tomboy. Sounds rather quaint and old-fashioned, doesn’t it?

So what does Title IX mean in terms of international competition? If, (and it’s a big if) the United States “cares” about a women’s sport, it’s almost certain that the United States will kick ass in this sport. And, by “care”, I mean providing sports support in schools and colleges. Because if that happens, we will have so many girls playing this sport that we can only help build a great team. But, if a particular sport doesn’t have that Title IX support… Well, chances are we’re not very good at it. Why? Because all “good” athletes will play sports that are supported.

And that support shows up in college, high school, and NCAA-sanctioned sports. NCAA sanctioning is of particular significance because of the scholarship support that typically accompanies NCAA recognition. You don’t have to look very hard to see a strong correlation between sports that the United States isn’t very good at and sports that aren’t sanctioned by the NCAA. And, while this is also true for men’s sports, the problem is further compounded for women’s sports. Indeed, the overall pool of female athletes (for all sports) is smaller than that of men. And, because Title IX has become a forcing function for equity, there are simply more scholarship opportunities for female athletes. And, in turn, this means that there are fewer female athletes (without scholarships) and therefore looking for a new sport like team handball.

The purpose of this rant: to help the reader understand why women’s team handball participation numbers in the United States are significantly lower than men’s. And why improving the number of female participants might be even more difficult.

The structure of the USA women’s handball team is quite similar to our men’s programs. Similar, but on an even smaller scale.

Training Centres: A Training Center is a place where handball is taught intensively. Two common examples: a European-style academy and what the United States has called residency programs in the past. Currently, there are no handball training centers in the United States, although Chicago’s youth program has some elements of an academy, albeit on a smaller scale.

Clubs: There are approximately 8 adult women’s clubs in the United States. These clubs vary greatly in terms of size, organization, and level of play. Currently, with the exception of Club Rogue, each of these clubs is made up almost entirely of expatriates living in the United States. And, Club Rogue, barely fits the traditional definition of a club. It’s simply a collection of current and former national team athletes living in multiple locations who get together a few times a year for weekend tournaments.

Collegiate Clubs: An important subset of clubs are collegiate clubs affiliated with a college or university. There are currently only 3 women’s collegiate clubs in the United States. It’s also worth pointing out that collegiate club sports are radically different from NCAA-sanctioned sports. There are no scholarships, and colleges generally only provide high-level support. As the athletes are students, in most cases they are between 18 and 23 years old.

Youth Programs: These programs are comprised of middle school (ages 12-14) and high school (ages 14-18) athletes. There are two fairly well-established programs in the United States, one in San Francisco and the other in Chicago. About 10 girls participate in the San Francisco area and they play on male-dominated teams. About 20 girls are training in Chicago for the IHF Trophy tournament in October.

Other Activities: Team handball is played in physical education classes in hundreds, if not thousands, of schools. But this handball is often only a crude facsimile of the game, taught by teachers unfamiliar with the sport, for a few lessons and with many rule variations. There are also a number of colleges offering intramural programs. (Intramural sports are lower level competitions where multiple college teams compete against each other.) Again, the handball being played is often just a facsimile of the game we all know.

Last April and May, the United States held its collegiate and national club championships. Contrary to European countries, there is no national league and these championships disputed over only 3 days are open to all. A Canadian club from Alberta even participated and their presence alone resulted in the odd situation of more Canadians than Americans playing at the US Nationals. This table breaks down the total number of participants in these 2 events.

A few obvious points from these tables.

In terms of national team planning, it is of course necessary to focus strictly on the demographics of American citizens. The following tables break down U.S. club citizen representation and add estimates for U.S. expats playing overseas and youth program attendance. These estimates are based on extrapolation of national league data and national team data. For US-based numbers, I’ve added athletes based on known clubs that haven’t competed in national championships. For overseas numbers, I took the number of expatriate players who played on the Sr, Jr and Youth rosters for the past 10 years or so (25 in total) and doubled that, thinking that this would cautiously account for unknown or lower level players. Anecdotally, I would estimate that the annual total is higher in younger players and drops significantly as players get older. For the most part, I tried to error on the conservative side. The only exception is that I have not supplemented this data with the inclusion of school physical education and college intramural programs.

This is a high-level analysis only. In a future article, I will take a closer look at America’s elite player pool and the pathways for athletes to enter that pool.